Funeral services for Bernard F. Heilmann will be at 6 p.m. Friday at St. Theodore Catholic Church in Albert Lea. The Rev. Russell Scepaniak will officiate. Visitation will take place one hour prior to the service, and interment will follow the service at St. Casimir’s Cemetery in Wells. 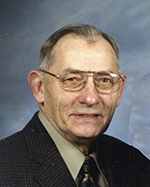 Bernard passed away peacefully on Sunday, May 28, 2017, at Good Samaritan Society in Albert lea. He was 91.

Bernard Francis Heilmann was born on Nov. 28, 1925, to Albert and Elizabeth (Stivaruis) Heilmann in Grant County, Wisconsin. He grew up Fennimore, Wisconsin, and Prairie Du Chien, Wisconsin. He was drafted into the United States Navy and served his country honorably for two years. After the service, he moved to Dubuque, Iowa, to work for John Deere. He would soon move to Minneapolis, where Bernard and a business partner would start a home improvement business. It was in Minneapolis where he would meet his future wife, Lorraine. Bernard and Lorraine (Schuster) were married on Sept. 17, 1960, in Wells. To this union, five children were born. The couple resided in Freeborn, where Bernard farmed and raised hogs for many years.  After his retirement, Bernard made trailers for many people in the area. He was an incredible welder. In his early years, he enjoyed bowling, playing cards and golfing. He hardly missed coffee group with his friends, many times going twice in the same day.

Bernard is preceded in death by both parents and a sister, Ann Forbes.