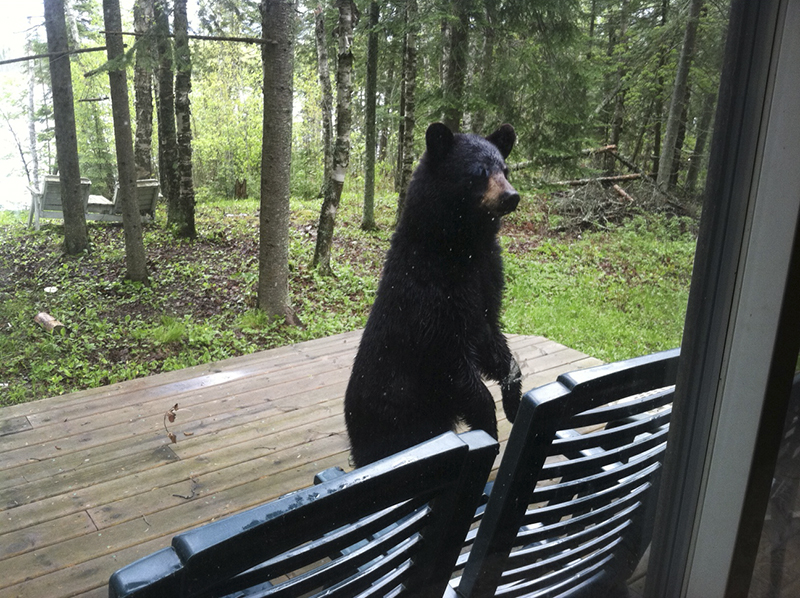 A frequent visitor — who the Herfindahls called Yogi — seemed to be intent on checking out the inside of their cabin one day this past week. - Provided

This past week, my wife, Jean, and I headed up to the cabin for a few days with hopes of fishing and enjoying some nice weather. The nice weather never materialized, nor did the fishing, but instead we were welcomed by rain, wind and cool temperatures. On most rainy days, we can usually enjoy watching the birds visiting our feeders, but this week the birdwatching was interrupted by a visitor.

This spring, I purchased a couple of trail cams, which I set up around the cabin to just see who or what visits our cabin when we are not there. On my first visit after they were in place, I was very surprised to see the variety of wildlife that seem comfortable hanging out at the cabin. We have raccoons, which visit almost every night looking for some scraps that may have been left. There was a deer that also visited frequently along with a fox and porcupine. The biggest surprise was a young black bear that not only made evening visits but also visited during the day. I was pretty excited to get some good shots on the trail cam, but what I didn’t expect is what happened next.

My wife and I were enjoying a fire in the wood stove on a lazy morning as we watched the rain roll in and out, which fit in perfectly with the cool temperatures and the never-ending cloud cover. It seemed as if there was always a mist and, once in a while, it would rain harder to make being outside less than desirable.

Oh well. We had plenty of entertainment watching the birds, chipmunks and an occasional red squirrel.

As I sat in a chair sipping a cup of coffee and gazing out at the array of critters at the feeder, I suddenly noticed a black bear strolling leisurely past while eying the bird feeder hanging above its head. I was amazed this critter was bold enough to visit our cabin in the daylight while we were there. I called to Jean and told her to look out the window and we stared as the bear sniffed around before standing on its hind legs and reaching for one of the feeders. I had the deck door open and was taking a video when it reached for that feeder and I yelled “No!” The bear stopped, looked at me and started to reach for the feeder again. This time I yelled a little louder and the bear stopped, stared and walked on hind legs to an adjacent tree and seemingly gave it a hug. I would say it was about a 2-year-old bear, which weighed roughly 200 pounds or so. It looked very healthy. My wife, who has a way of naming critters, gave the bear the name of Yogi, so that is how we refer to it from now on.

Now, deep down I know the bear had no idea what the word “no” meant but to see it react to that command was priceless. My wife said, “Wouldn’t it be a great picture if it came up on the deck and looked in?”  In the minutes following that statement, the bear appeared on our deck peering in the deck door and then it walked one end to the other before leaving. It didn’t go far and it actually seemed intent on entertaining us. It climbed one tree and then came down only to climb almost all the way to the top of another looking down on us while munching on some newly sprouted leaves. In the time this bear was basically showing off for us, it always watched as if to make sure we were looking. I tried shooing it off a couple of times, but Yogi just took a long circle around the cabin and came back, even coming up on the deck one more time before it finally must have decided we weren’t going to play or feed it and headed off to visit the neighbor.

What a great experience!

Someone asked if Jean was scared and I said no, she was actually disappointed the bear didn’t come back the next day. As we were packing to leave, I found muddy paw prints on the passenger side of the vehicle. No, I wasn’t going to let Yogi drive; I wonder if Boo Boo was somewhere in the area?

Until next time, please remember why we pause to celebrate Memorial Day. If you see a veteran or an active duty serviceman or woman please take the time to thank them for their service — it means a lot.