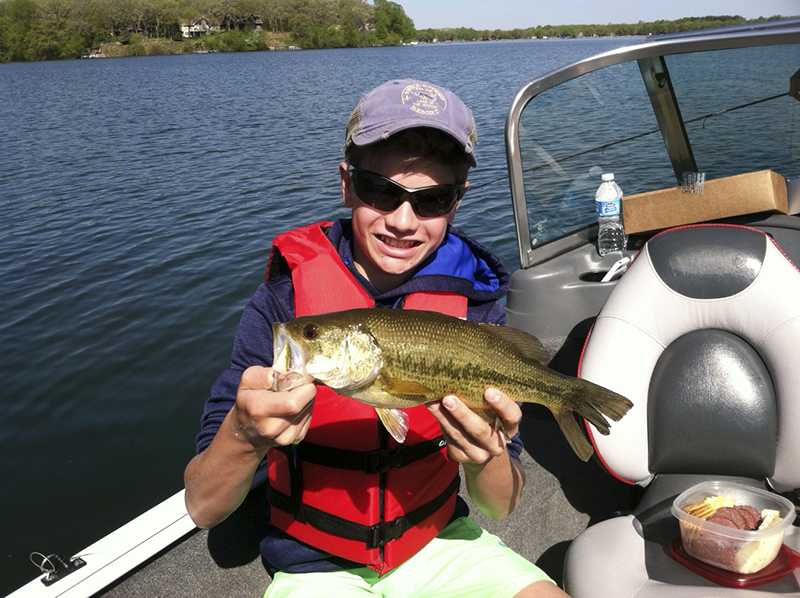 Logan Richter of Cold Spring is pictured with a largemouth bass he caught while fishing with outdoors writer Dick Herfindahl on the Governor’s Fishing Opener. - Provided

A pleasant surprise awaited the participants in this year’s Governor’s Fishing Opener; warm, sunny weather. This was quite a different scenario from last year when we were greeted by 2-3 inches of fresh snow on opening morning.

The only thing warmer than the weather was the welcome that the folks of St. Cloud extended to their guests. There was a golf scramble on Thursday and on Friday there were many tours highlighting the history of the area with museums and many other interesting things to see. The community picnic (which was open to the public) was held at Lake George late Friday afternoon.

According to Dan Ochsner, the event chairman, St. Cloud has been trying to host the Governor’s opener for several years. Their time finally came and when it did, they did a splendid job of showcasing their great city and the surrounding area.

The weather was great and from what I have heard most folks had pretty good luck fishing the river while catching a variety of species. The Mississippi River is a great resource and it runs right through the heart of the St. Cloud area.

Hosting this event gives the host city a chance to showcase their area to the rest of the state and beyond. This event could never happen without the many hard working folks who volunteer their time to do a little bragging about their community. They have a right to be proud because they did a great job.

Myself and my friend Jeff Anderson from Watertown, South Dakota fished together again this year. Each year we are paired with a fishing host who, sometimes may be an actual guide but most of the time is just a guy who loves to fish and do his part to showcase his favorite “hot spot” whether it be the river or an area lake.

As a fisherman and outdoorsman I have always stated that the success of any sport involving the outdoors has to have a certain element of luck involved. In my case luck is probably my biggest asset when it comes to fishing.

On Friday evening we met up with the fellow who was to be our fishing host for Saturday’s event. He was Doug Schramel who lives on an acreage outside of Cold Spring. Doug had brought along a young fishing buddy named Logan, who was thirteen and as we were to find out later, loved to fish as much, if not more, than anyone. Doug seemed a little apprehensive when he asked us if we minded fishing his favorite lake rather than the river. Both Jeff and I said we would gladly fish anywhere he wanted. He didn’t guarantee we’d catch a walleye but said that we would catch something.

The next morning, we met up with Doug and Logan at Doug’s house where we loaded the fishing tackle in his boat and were off to Big Fish Lake which was only about half a mile away. After talking to the kid at the access who was there to give us some information about invasive species we were off.

Doug told me that the lake association on Big Fish does a lot to ensure that they do not have an invasive species problem. On that note, they have also installed four nesting spots in various places on the lake and three of the four are being used; they are doing their part to keep the lake healthy.

This year Jeff caught the first fish which was a nice eating northern pike that he opted to return to fight another day. As the morning went along Jeff was busy losing minnows, which kept Logan busy getting him new ones and baiting his hook. Logan and Doug caught quite a few small pike and Jeff caught another one while I waited patiently for my turn. Just before we were going to break for lunch Doug caught a dandy 27-inch walleye which was full of spawn and was quickly released. He said that he felt kind of bad about catching it when we were his guests but I told him he knows the lake and should be the one doing the catching; I really don’t think that he felt all that bad.

Around noon we went back to Doug’s house where his wife, Carri had made up quite a feed but left the brat grilling to Doug. This was what we had instead shore lunch and both Jeff and I felt that they really went that extra mile to feed us and make us feel at home. I don’t know what shore lunch was but I don’t think it could compare to ours.

Doug took us back out on the lake where I made short work of getting rid of the dreaded “skunk” with a small northern and then a nice bass. We also caught some crappies and sunnies in the afternoon which made the whole day a pretty successful one as far as openers go.

Watching Logan net fish, bait Jeff’s hook, and constantly cast, reminded me of my grandson Trevor and his enthusiasm for the sport. Logan also deer hunts and ice fishes so I just know that he will be a good outdoorsman when he gets older. Because he does things the right way and respects the environment I have confidence that our Minnesota outdoors heritage will be in good hands for many years to come.