Funeral services for Fern C. Edwin will be at 11 a.m. Thursday at Trinity Lutheran Church. The Rev. Eileen Woyen will officiate. Interment will be at Alden Cemetery. Visitation will be from 5 to 7 p.m. Wednesday at Bayview/Freeborn Funeral Home and one hour prior to the service at the church. Online condolences are welcome at www.bayviewfuneral.com. 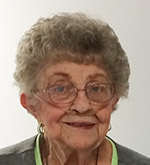 She enjoyed cooking, baking, reading, bowling and playing cards — especially 500 and Bridge. Most of all, Fern loved spending time with her family.

Fern was preceded in death by her parents; husbands George Hendrickson, Ralph Moore and Donald Edwin; and sister, Lois Steele.