Memorial services for Gladys E. Reese of Albert Lea will be at 11 a.m. May 29 at Bonnerup Funeral Service in Albert Lea. The Rev. Jamie Cameron will officiate. Friends may greet the family one hour prior to the service. Interment will be in Graceland Cemetery. 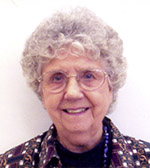 Gladys Elmira Reese was born Feb. 14, 1913, at her parents’ home in Northwood, to Ray and Jessie Lundberg. She attended Northwood Schools until the age of 6 and then moved to Albert Lea. On April 17, 1927, she was baptized by immersion along with her brother, Lawrence, at First Baptist Church in Albert Lea because of the influence of one of her favorite Sunday school teachers, Mrs. Balch. She became a member of that church and on May 1 of that same year received “The Right Hand of Fellowship.” On her 16th birthday her grandmother, Pickle, gave her a Bible. Many years later her son, Boyd, got a phone call from a lady in Washington state that had found this Bible on a closet shelf in a house that she had lived in. She asked if she should mail it to Boyd. He was very glad to retrieve it and sent postage money for it to be sent back to him in Minnesota.

She graduated from Albert Lea High School in 1933. She was Albert Lea’s first Homecoming Queen in the fall of 1932.

She married Frank Boyd Reese on April 23, 1933, in the Little Brown Church in Nashua, Iowa. Together they had three sons, Frank, Boyd and Brian. She was a member of First Methodist Church in Albert Lea and was active in mission circle there. She was also a member of Eastern Star and a study group in Albert Lea.

Gladys was employed in the Albert Lea High School cafeteria. In 1957 they relocated to Bothell, Washington, where Frank was employed at Boeing Aircraft. While in Bothell she took several night classes at the University of Washington studying food services. She was manager of Bothell High School cafeteria and worked summers at Camp Armac in food service.

They later traveled throughout the country in their motorhomes and settled in Lake Tahoe for quite a few years. She worked at Harrah’s in many different specialty areas. She is remembered by her family as an outstanding cook.

Gladys came back to Albert Lea to live June 16, 2007, and resided at Bancroft Creek Estates and at 101-years-old went into the Good Samaritan Care Center.

She was preceded in death by her husband of 60 years, Frank; her parents; and brothers Lawrence and Claude.