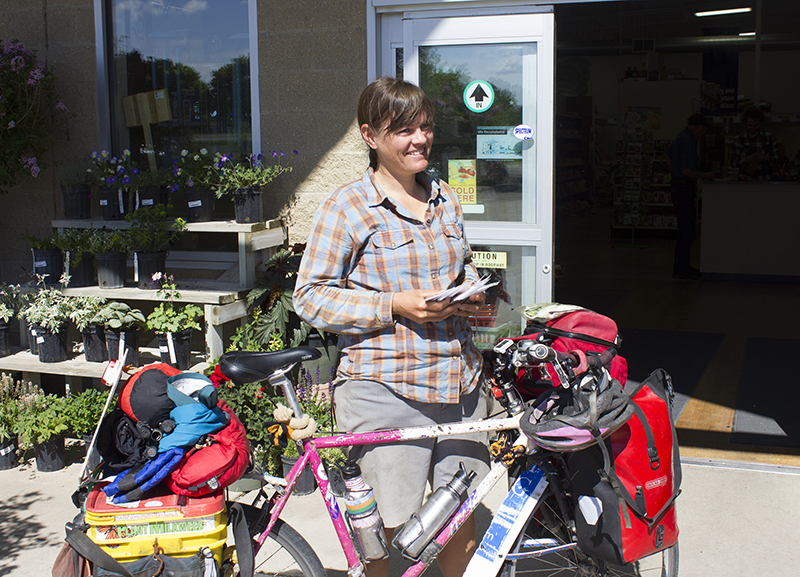 Sara Dykman stops at Albert Lea Seed House Tuesday while on her ride from central Mexico to Canada and back. Dykman is the coordinator of ButterBike, which seeks to raise awareness of the declining population of monarch butterflies. - Tyler Julson/Albert Lea Tribune

Sara Dykman, ButterBike rider and coordinator, made a pitstop in Albert Lea Monday night as part of her 10,000-mile bike ride to spread awareness about the monarch butterfly.

Dykman is the sole rider on a trip that started in central Mexico, travels up into Canada, over to the East Coast, then down back to where she started in Mexico — all while riding a bicycle. The path she is traveling is the same as the migration patterns monarch butterflies follow.

Albert Lea is about 3,000 miles into Dykman’s journey across the three countries. Though she has experienced some minor hardships along the way — such as flat tires, sunburn and unpredictable weather — she said it’s all about the message she is sending along the way.

“Along the trip, I’m talking with folks about supporting the monarch, which has seen about a 90 percent decline in population over the last 20 years,” Dykman said. “Every year there is less and less habitat, which means every year there are less monarchs. The goal of my trip is to be a voice for the monarch, helping to bring back habitat and share our planet.”

Dykman said she has stopped at many schools and wildlife refuges on her trip and enjoys teaching young children, as well as adults, about conservation and nature.

The best way to help in the effort to stop the decline is to share property with the monarchs, Dykman said. Planting native plants and milkweed go a long way in helping the species. Milkweed is the only food source of the caterpillar stage, meaning it is crucial for the survival of the monarch population. 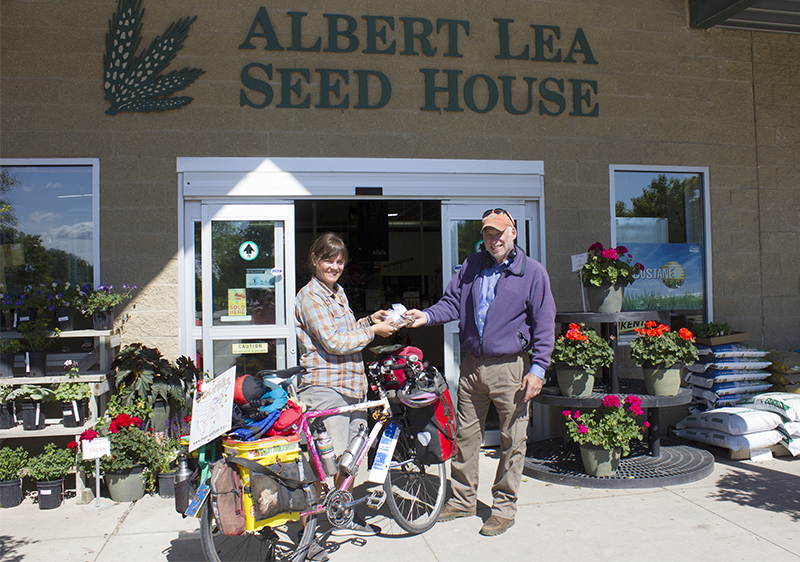 On a chance encounter, Dykman stopped at a local store in town where she met Tom Ehrhardt, the vice president of operations at Albert Lea Seed House. It didn’t take long for the two to connect and realize they had much of the same goal in mind.

Ehrhardt and his wife opened up their home to Dykman, offering a nice place to rest and clean up — as opposed to her normal setup of a tent and sleeping pad. In the morning she headed to the seed house where she was given many small bags of milkweed seed to plant along the rest of her trip.

“I hadn’t known about her and the project before I met her,” Ehrhardt  said. “It’s great, she’s getting out and doing this missionary work to remind people that individually we can plant milkweed just in our gardens. She reminds us that even though we’re only one person and we only have a small spot, we can still benefit the planet and especially monarchs with milkweed.”

Dykman started her trip at the beginning of March in central Mexico and hopes to complete her journey back where she started sometime in November.

“Albert Lea is a home of the monarch,” Dykman said. “The monarch doesn’t live here all of the year, but it lives here for some of the year. It’s time we do something so we don’t erase them from the planet.”

To learn more about the cause, visit www.beyondabook.org, where Dykman keeps an updated blog on her travels and more information about her mission.