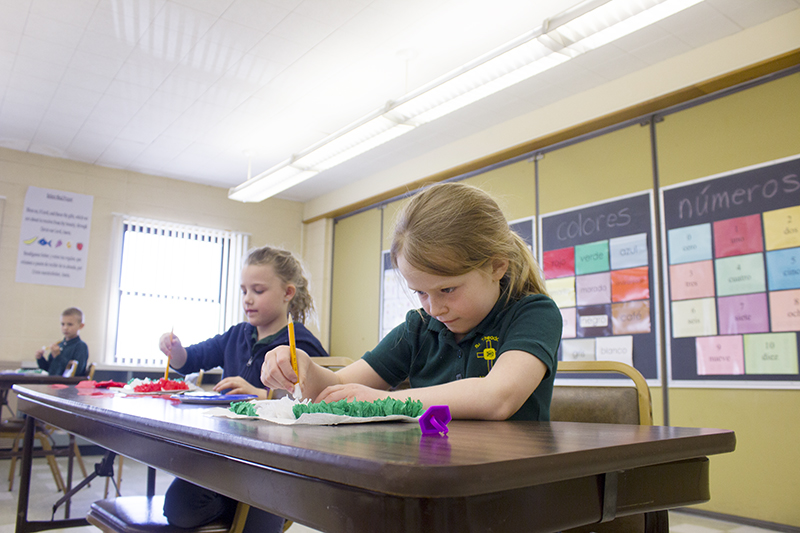 St. Theodore Catholic School students have started to receive extensive Spanish lessons that could help them as they continue to grow.

Kindergarteners learn terms in Spanish regarding colors, numbers, shapes, animals, family and classroom items. Those lessons evolve in following years. Learning prayers in Spanish is also a focus at the K-5 school, and students build their knowledge of numbers in Spanish through the fourth grade.

“Each grade gets a little bit of review,” said Spanish teacher Aimee Chalmers. “By the time they are in fourth grade they know how to count to 100, but they also get something new and special for that grade.”

First-graders learn Spanish terms for parts of the human body and clothing. In an interactive lesson, students read Spanish clothing items, running to find the items in a suitcase before putting the clothes on and running back.

“They always think it’s hilarious when the boys wear dresses, and that sort of thing,” Chalmers said. She has developed the program during her more than six years at the school.

Third-graders hosted a fiesta May 5 — Cinco de Mayo — after students learned more than 70 food items in Spanish during the year. Class members sent invitations to the Rev. Russell Scepaniak — the priest at St. Theodore Catholic Church — along with other school officials. Placards in Spanish were produced, and decorations were hung. Food was set in a buffet format.

“It looks so neat,” Chalmers said. 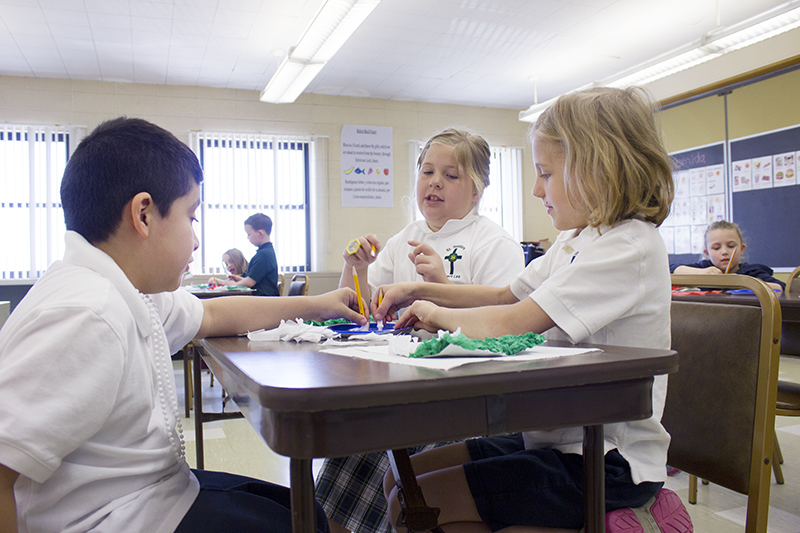 Fourth-graders learn about houses. This year they labeled at least 50 items they learned in class in diagrams of houses that students produced.

“It’s a fun way to tie together all the different things we’ve learned and then put it together in one big project,” Chalmers said. Class members also learned basic conversation phrases.

Fifth-graders pray daily and say the Pledge of Allegiance in Spanish. The class discusses the weather, calendar and time in Spanish. Chalmers said two students told her their favorite parts of the class were learning prayers in Spanish.

“Using lots of practical things — knowing how to tell time or knowing how to tell the date, just some basic things — but I thought it was really cool that a couple of them chose the prayers that we learned,” Chalmers said. “It’s wonderful to learn those, because now you are actually using full sentences of Spanish.

“It’s nice to be able to use it more than just saying a couple stilted words here and there, to just let it flow and practice punctuation.”

Chalmers, band director at Hollandale Christian School and Spanish teacher and band director at St. Casimir’s School in Wells, said students display their knowledge of the Spanish language to her outside of class.

Chalmers, who has developed the program during her seven years at the school, said she plans to continue tweaking and adjusting the program.

She uses visible examples such as grapefruits and macadamia nuts to help class members understand the Spanish language.

Chalmers, who has had children attend St. Theodore Catholic School, said she appreciates the school’s efforts to teach Spanish to students at a young age.

“It’s neat that they can see like ‘that’s how they dress for cultural events,’ or ‘this is how they say this,’ but really we’re all the same, and it’s neat to share that with them,” Chalmers said.