Phyllis Pauline was born Dec. 5, 1926, in Armstrong, Iowa, to Florence P. (Payne) and Charles T. Petersen. She lived in the Minnesota communities of Hollandale, Hayward, Oakland, Moscow, Austin, Albert Lea and Alden until her marriage on Jan. 23, 1946, to Paul E. Hanson.

They lived on a farm in Bath Township until July 1957, when they moved to Clarks Grove on Independence Avenue. They built a house on the east side of Clarks Grove and lived there for 23 years. 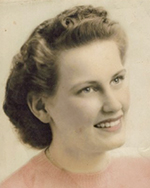 After Paul’s death, Phyllis moved to Bancroft Creek Estates in Albert Lea in January 2002. In 2012, she moved to Bryant House Assisted Living in Maple Plain.

Phyllis was very active in the community. She was a member of First Baptist Church of Clarks Grove and the Crusaders Sunday school class. She taught in the WEE school program and was a member of several committees. She served on the parent teacher association council of District 241 and was a school bus driver for 13 years. Phyllis served with the Freeborn County Historical Society, Freeborn Council 4-H Advisory Board and was a 4-H leader for 20 years. Phyllis was a correspondent for the Albert Lea Tribune and Ellendale Eagle. She was a member of the Naeve Hospital Auxiliary and Ride Services. Phyllis was a member of both the Minnesota and International Flying Farmers and had many roles within those organizations, including teen adviser, 1980 Flying Farmer of the Year and 1984-85 Minnesota Flying Farmer Queen. She also a very active member of the DOES Drove No. 70 in Albert Lea and she joined the Elks Lodge No. 813 in 1999. 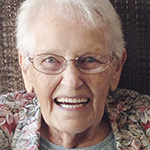 Phyllis was widely known throughout the community for her volunteer services that expanded her entire life. A few of her volunteer projects included many hours at Naeve Hospital, as an instructor for the AARP 55 alive/mature driving course and her church. She was always interested in helping children and did so in so many ways. In recent years, she made over 4,000 baby caps for newborns at Naeve and Buffalo hospitals, as well as hundreds of hats for children with cancer.

Phyllis counted her riches as her family and by the number of friends she had.

A celebration of Phyllis’ life will be at 2 p.m. Saturday at First Baptist Church of Clarks Grove. Visitation will be one hour prior to the service at the church. Interment will be private.

In lieu of flowers, memorials made to Clarks Grove Area Heritage Society are preferred and may be sent to P.O. Box 188, Clarks Grove, MN 56016.