Reckless driving call leads to 2 arrests for a stolen car

Law enforcement detains a passenger from a car reported stolen that went off Interstate 90 Thursday morning, rolling up an embankment before coming to a stop. The driver, who fled, was apprehended not far from the scene. - Eric Johnson/Albert Lea Tribune

Jude Thomas Mary O’Neill, 20, of Minneapolis was charged Friday with four felonies: being a violent felon in possession of a firearm, theft for taking a motor vehicle without the owner’s consent, possession of machine guns or short-barreled shotguns, and a firearms charge for altering the serial number on a weapon.

Stephanie Anne Pruitt, 47, of St. Paul was charged with three felonies: theft for taking a motor vehicle without the owner’s consent, possession of machine guns or short-barreled shotguns, and a firearms charge for altering the serial number on a weapon.

According to Austin Police Chief Brian Krueger and court records, Austin police and Mower County deputies responded to a call of a vehicle driving recklessly on westbound Interstate 90 in Mower County at 9:57 a.m. Thursday. 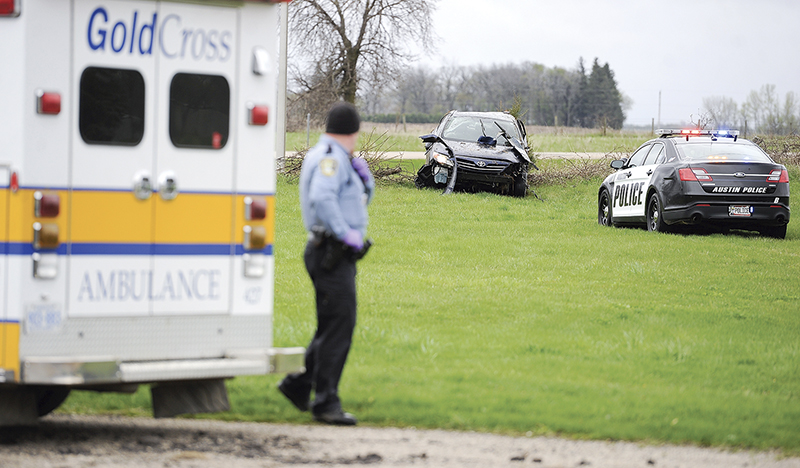 An Austin Police officer watches a car involved in a crash on Interstate 90 on the west edge of Austin Thursday morning. The driver fled the scene and was apprehended moments later not far from the scene. – Eric Johnson/Albert Lea Tribune

An eastbound officer observed the vehicle, a blue 2013 Toyota, driving 94 mph in a 65 mph zone passing Turtle Creek Bridge. The officer turned around in the median to follow the vehicle. The vehicle lost control, went into the median just past the Oakland Avenue exit, overcorrected and crashed into the ditch before the officer could initiate a stop.

A citizen had stopped to help a female passenger, Pruitt, out of the vehicle when the officer arrived.

Officers were advised that the driver, a black male — later identified as O’Neill — wearing a white shirt had fled on foot and was running westbound from the accident.

O’Neill was first seen hiding behind a garage and was then seen running near the West Oakland trailer park. Police set up a perimeter, and O’Neill was apprehended on 36th Street Northwest.

O’Neill had no shoes and was wet and muddy. He was reported as a missing person, and he had multiple arrest warrants for receiving stolen property and another for a probation violation.

Pruitt also had warrants for her arrest. Both were arrested after receiving medical examinations.

The vehicle, license plate 493-LTA, came back stolen out of Minneapolis. In the trunk, police found two sawed-off shotguns and several backpacks, which contained methamphetamine residue and items associated with drugs. They also found a baggie of marijuana in the car.

O’Neill, who had been driving, told police he smokes meth but didn’t know why he was driving so fast, where he was coming from or what happened when he crashed, saying he didn’t see the unmarked police car.

Pruitt, a friend of O’Neill’s, said she had been drinking the night before when O’Neill picked her up in the car, but she didn’t know why she was in Austin.

Pruitt complained of shoulder pain and was later taken to Mayo Clinic Health System in Austin.