A funeral service will be at 10:30 a.m. Monday at Bethel Lutheran Church, 15722 490th St. in Scarville, Iowa. The Rev. Doug Domokos will officiate. Burial will be in Bethel Cemetery. Visitation will be from 5 to 7 p.m. today at Mittelstadt Funeral Home, 902 E. Main St. in Lake Mills, and will continue one hour prior to the service at the church.

He was born March 9, 1938, at home in Emmons, the son of C. Martin and Hazel Throne. He was baptized and confirmed at Emmons Lutheran Church. He was a 1956 graduate of Emmons High School. 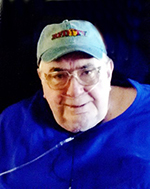 Dicky was united in marriage to Karen Leanne Sunde on June 27, 1958, at Bethel Lutheran Church in Vinje. They resided and farmed in rural Vinje, where they raised their six children. He served on various co-op and elevator boards, church council and committees. His first job out of high school was at RILCO Laminated Products in Albert Lea, and then he began farming with his brother-in-law until he farmed on his own for more than 50 years.

Dicky never had a bad cup of coffee unless it was missing a conversation. He was well known for his ability to diagnose any mechanical problem 24/7, and as a competitive tractor pull champion. He loved all types of racing, from go-carts to snowmobiles to NASCAR. Although people knew him as a farmer and master mechanic, he leaves a legacy for his family of the satisfaction gained from hard work; he was a thinker and seeker of knowledge, an innovator who always had to know the how and why. He was loved by many for his humor, wit and generous spirit; a man who always reached a hand down to lift another up and felt a responsibility to treat others as he wanted to be treated.

He is survived by his loving wife of 59 years, Karen; three sisters, Lois (John) Duff of Alva, Florida, Marlene (Robert) Sorenson of Decorah, Iowa, and Audrey Whitney of Alva; son, Michael (Melanie), of Vinje and their children Christopher (Sara), Peyton and Brooklyn of Lake Mills, Taylor of Downers Grove, Illinois, Matthew of Maple Grove and Zachary and Kristyn of Vinje; daughter, Robin (Kent), of Quad Cities and her daughter, Sarah (Decker), of Le Claire; daughter Carol’s sons Angel of Lake Mills and Danny (friend, Karralyn) and Tatum of Riverside; daughter, Merna, of St. James City, Florida; son, Brian (Deb), and their son, Jeremi (fiancee, Ashley) and Alana, all Lake Mills; and daughter, Teresa (Robert) Feldmann, of Williamsburg and their children Justin (Emily) and Graham of Williamsburg, Jessica (Cody) and Stella Jo, Parnell and Jordan of Williamsburg; and many, many beloved nieces, nephews, cousins and friends.

Online condolences can be left at www.mittelstadtfuneralhome.com.