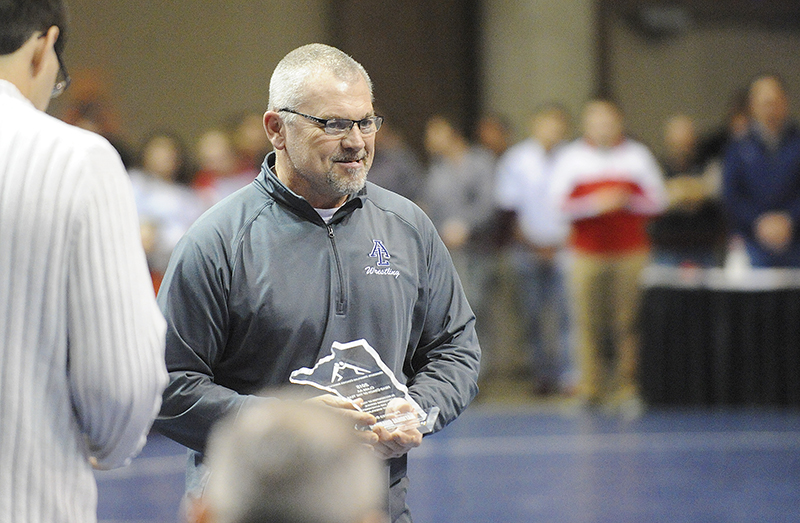 Albert Lea wrestling coach Larry Goodnature is retiring after 25 years at the helm for the Tigers. - Micah Bader/Albert Lea Tribune

Larry Goodnature has been a staple of Albert Lea wrestling for 42 years — four as a wrestler and 38 as a coach.

For the better part of two decades, Goodnature led the Tigers wrestling program as head coach.

Come this winter, there will be a new face to lead Albert Lea’s historic wrestling tradition as Goodnature steps aside and retires after 25 years at the helm.

He started his athletic career as a basketball player at Southwest Middle School in seventh grade. By eighth grade, though, wrestling had taken over and would eventually become a part of Goodnature’s life for the next 50 years.

Goodnature wrestled for Albert Lea from 1967 to 1971. While he won a state championship at 145 pounds his senior year, it was the months leading up to his championship win that stood out to then assistant wrestling coach Neal Skaar.

“Larry had all of the physical tools, everything you’d want in a wrestler,” Skaar said. “But he was too laid back; lacked confidence and assertiveness. He lived up to his last name, Goodnature. He was simply too good-natured.”

But just at the regionals rolled around, a switch flipped for Goodnature. His progression in those departments was gradual most of the year, then eventually took a sudden shift.

“I think a month before the end of his senior year in 1971, he got a lot of confidence and more assertive,” Skaar said. “He beat the defending state champion in the finals of the regional tournament, Mark Lange of Caledonia, and then beat him again in the finals of the state tournament. He had been building his confidence during his senior year, but that last month was something.”

That year, the Tigers took home a team state championship, too, and that team still holds the Minnesota state record for most points scored by a team in a state tournament.

After high school and with a new-found confidence, Goodnature headed to Mankato State University, where he earned three NCAA All-American honors.

In 1973, he finished fourth in the country at 158 pounds. He took sixth in the same weight class the following year, and in 1976 he finished fifth.

Aside from his five years as a Maverick, Goodnature has been a Tiger all his life.

He coached the Hutchinson Tigers from 1976 to 1979 and won the Suburban West Conference each season at Hutchinson, but always had the itch to move back home.

“I always wanted to get back to Albert Lea,” Goodnature said. “I’ve always been a part of winning programs and Albert Lea had that history.” 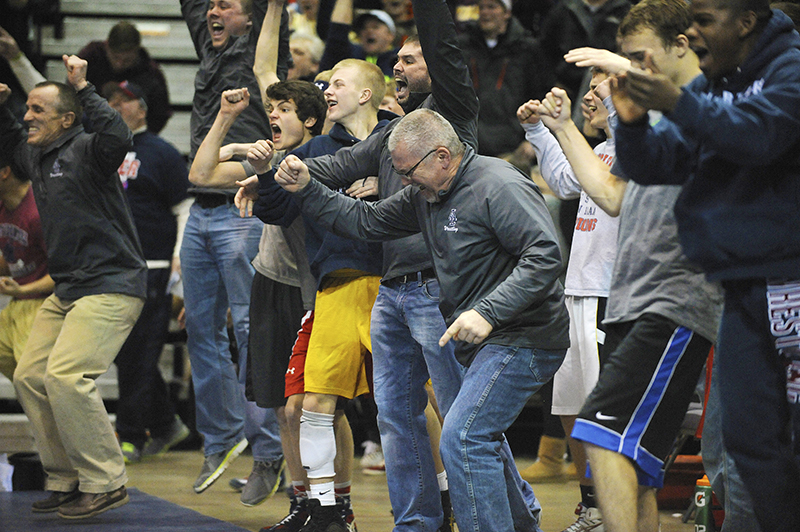 The Albert Lea wrestling team’s sideline erupts during the 2015 Section 1AA finals after a wrestler made a win that qualified the Tigers for the Class AA state tournament. – Micah Bader/Albert Lea Tribune

In 1979, he moved back to Albert Lea and was the first guy on Skaar’s list — who became head coach that same year — to help coach the Albert Lea Tigers.

“He was a very likable guy and he had a lot of knowledge of wrestling,” Skaar said. “He was the kind of guy you wanted around.”

Goodnature and Skaar switched roles in 1992, giving Goodnature the head job at his alma mater.

“I knew he would be a head coach at Albert Lea one day,” Skaar said.

During Goodnature’s 25-year reign, Albert Lea managed to win 10 Big Nine Conference titles and made the Minnesota state tournament seven times as a team. More importantly, Goodnature kept building on the program, like any great coach.

“He had great organizational skills, things I didn’t have,” Skaar said. “He had a better ability to get people to work than I did. He was really great at building the boosters program and building on to the wrestling program. He was able to get so many good people involved.”

Goodnature wanted to instill qualities into his wrestlers they would carry on into their lives after wrestling.

“You have to respect your teammates, opponents, officials and the sport itself,” he said. “Wrestling is the toughest sport. It’s 1-on-1. You have to learn how to win and know that you’re not going to win every time.”

He was right, except for one thing — his teams won nearly every time.

Over the last two and a half decades, his teams went 546-166, including 92-12 over the last three years. His 546 wins ranks him as the 10th all-time winningest coach in Minnesota high school wrestling history.

His teams made the state finals four times and finished third, fourth and sixth the other three times, respectively. He coached 136 state entrants, including sending six to the state tournament this past March. Sixty-seven of those were state place winners and eight were individual state champions.

Over the past two or three years, Goodnature had been thinking about the day he would retire. It wasn’t until midway through the 2016-17 season that he made up his mind he was going to call it a career.

“This year, my wife, Mary, and I talked about it,” he said. “She wanted me to be done, but always left the final decision up to me. From the middle of November to the middle of March, I was gone. As a wrestling coach, you have to have a very understanding wife, and she has been more than that. So during the season, I decided this was going to be it.”

Goodnature’s exit comes as a bit of surprise to Garrett Aldrich, a recent Albert Lea graduate and three-time state champion, but he knew it was coming sooner or later.

“I was just talking to Goody at his house, talking about fishing, my chickens or whatever, and he didn’t even tell me he retired,” he said. “I didn’t even know. I figured he was going to retire this year or next year, but I wasn’t sure.”

One thing was sure, though — the impact Goodnature has had on the wrestling program and the individuals who put on the singlet.

“Goody has had a very big impact on the program and myself,” Aldrich said. “I can say that just coming from me. He coached me to three state titles and a third-place finish and he always believed in me. This last state tournament, I wasn’t feeling good with my ribs, but he never stopped believing in me, even when I lost. I seriously can’t thank that man enough.”

Like with a lot of his wrestlers, Goodnature developed relationships with them whether it was at practice, on the bus or after practice talking in the coach’s office.

Aldrich describes his relationship with Goodnature as a tight one.

“Me and Goody had a very close relationship on and off the mat,” Aldrich said. “I’m just glad he can finally enjoy his retirement. He is the best coach I could’ve ever asked for.”

During his time, Aldrich was not the only one with whom Goodnature developed a relationship.

“I have some former wrestlers who are 45-46 years old and I go pheasant hunting with them out in South Dakota,” Goodnature said. “I’ve developed so many friendships with my wrestlers and coaches. I’ve also developed friendships with opposing coaches and officials because of all the time you spend with them competing in a gym on Saturdays over the years. It has been a great run and has been very rewarding.” 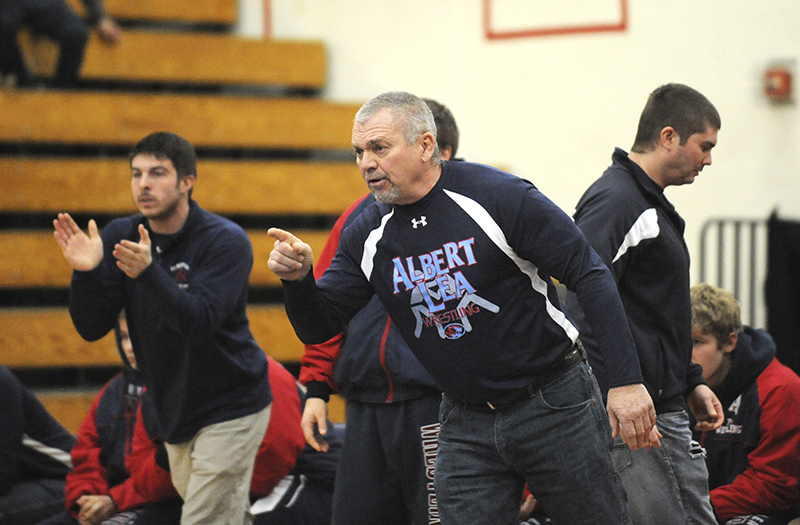 Larry Goodnature — involved with Albert Lea wrestling in some capacity for 42 years — has decided to retire. – Tribune file photo

Zach Glazier, who took second at state this past March and will be a junior this fall, has wrestled for Goodnature for three years and can’t thank him enough for the chance to wrestle for him.

“Goody kept our program at a very high (level) for a long time,” Glazier said. “Our success has proven what a great coach Goody was. He’s always been there for me as a wrestler and supporting and helping me along the way. I thank him for everything he’s done for me and the team.”

Aside from being a coach, Goodnature was also a teacher, mentor and — most importantly — is a father.

His son, Nate, can attest to that and his level of dedication.

“Not only was he a great coach, he was a great mentor and teacher,” Nate Goodnature said. “He didn’t just coach wrestling but he also taught you how to be a man and carry those lessons into life after wrestling. I know I wouldn’t be the man I am today without my dad, and I think that’s true with a lot of the kids he coached.”

When thinking of his dad’s legacy at Albert Lea, Nate Goodnature is sure his dad is happy with what he has done for the program and community.

“He has been a part of the Albert Lea wrestling program his whole life,” Nate Goodnature said. “I know he is very happy for what he has accomplished and what he has done with not only the program and school, but also the community.”

With a deep, rich tradition in wrestling, every Albert Lea coach had built upon the program and handed it off to the next coach better than when they arrived, and not many coaches have had the opportunity Larry Goodnature had. Since the 1950s, Albert Lea has had just three coaches — Paul Ehrhardt, Skaar and Goodnature.

Goodnature put in 25 years of adding to the program’s success and setting it up for a bright future.

“We’ve grown and coached our own kids, and that’s something I’m proud of,” he said. “It’s very difficult to be a good head coach. You have to put the time in. It’s a year-round job. You’re always thinking of how to make the program better.”

As for his retirement, Goodnature said he and his wife plan on doing some traveling, and he wants to get in some more pheasant hunting and even hunt some big game.

Good things don’t last forever, they never do. As a new era of Albert Lea wrestling will be ushered in this winter, it’s on the next coach to put the next piece in place, building on Goodnature’s success while also carving out his own path, just as Goodnature did.

“He was everything you’d want in a coach.”