AUSTIN — First District Rep. Tim Walz, DFL-Minnesota, said he has no information that the Trump Administration was somehow connected to the Russian involvement in the U.S. election process.

However, the recent firing of FBI Director James Comey has shaken the confidence of citizens and raised more questions about the nature of the Russian involvement in the U.S. electoral process, Walz added, speaking to a crowd of about 80 at a town hall meeting at Ray Live Learning Center auditorium at The Hormel Institute in Austin on Thursday.

A full, independent investigation needs to go ahead full throttle, he said, for both practical and ethical reasons.

“If left hanging, we’re not going to be talking about health care, or tax reform or transportation” in Congress, he said. “My take is … there is a deep concern for the integrity of our election process.”

And that is as it should be, he emphasized. People need to understand how fundamental such a threat is.

Any Russian disruption in the most essential function of democracy is “more effective (for Russia) than shooting a missile … even (former Republican Vice President) Dick Cheney said, ‘This is an act of war.’”

“If we can’t rally around this issue as a country … that concerns me,” Walz said. “We need citizens to safeguard our electoral process” by urging Congress to agree and the U.S. Attorney General to appoint an independent prosecutor.

Nothing gets congressional attention by an outcry of citizens, he added. 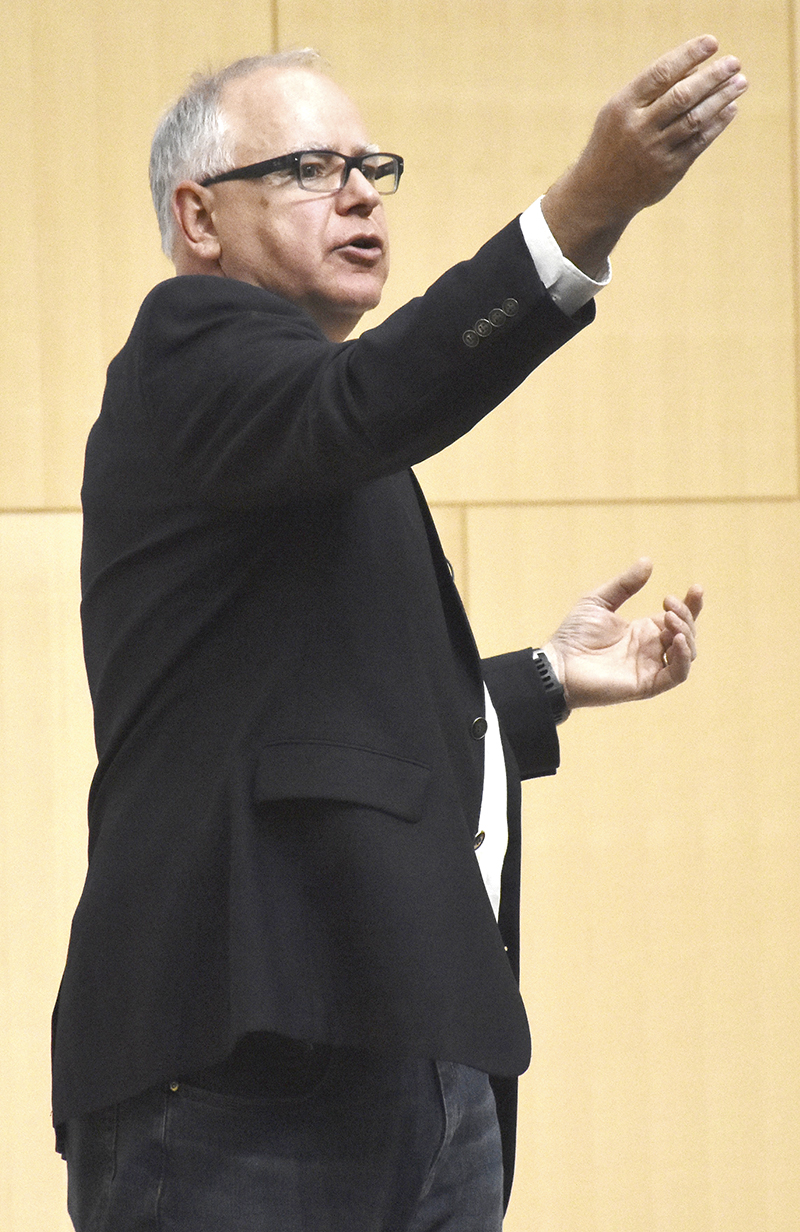 “I’m deeply concerned with the Russian involvement and the firing (of James Comey) is a symptom of it,” Walz said.

He added it was not a partisan issue; it was an issue of preserving the American democratic system.

“We’re in this together,” he said.

The discussion was the first volley in a two-hour discussion of issues ranging from the hot points of health care and immigration, to the Farm Bill and legalization of medical and recreational marijuana. Walz also discussed briefly his run for governor. He announced his candidacy in April.

While most in the crowd seemed to favor the Democrat’s stands, one man challenged Walz to “quit making excuses” for immigrants who are in the country illegally, despite the fact they were paying taxes, holding jobs or serving in the armed forces.

U.S. citizens, the man said, support immigrants through their taxes; immigrants, he said, put undue burden on schools and if they are living in the U.S. on expired visas, they are breaking the law.

Walz said, however, that while the immigration system needs to be reformed, that he could not support penalizing someone on an expired visa “who is doing everything right” and separating families.

He also said Congress needs to take a measured look at solutions to those things wrong with the Affordable Care Act. The recent House bill — opposed by AARP, American Cancer Society and others — will not serve anyone well, he said.

“They are unanimous,” he said, in saying the House bill would make it harder to be insured and deliver less — not more — in health care; those over 50 would pay exorbitant rates if in the individual market, and insure 24 fewer million. The health care insurance market does not react like most markets, and therein are some of the problems.

Overall, he added, entitlement to health care needs to be considered as a “basic human right … not something you can afford,” Walz said.