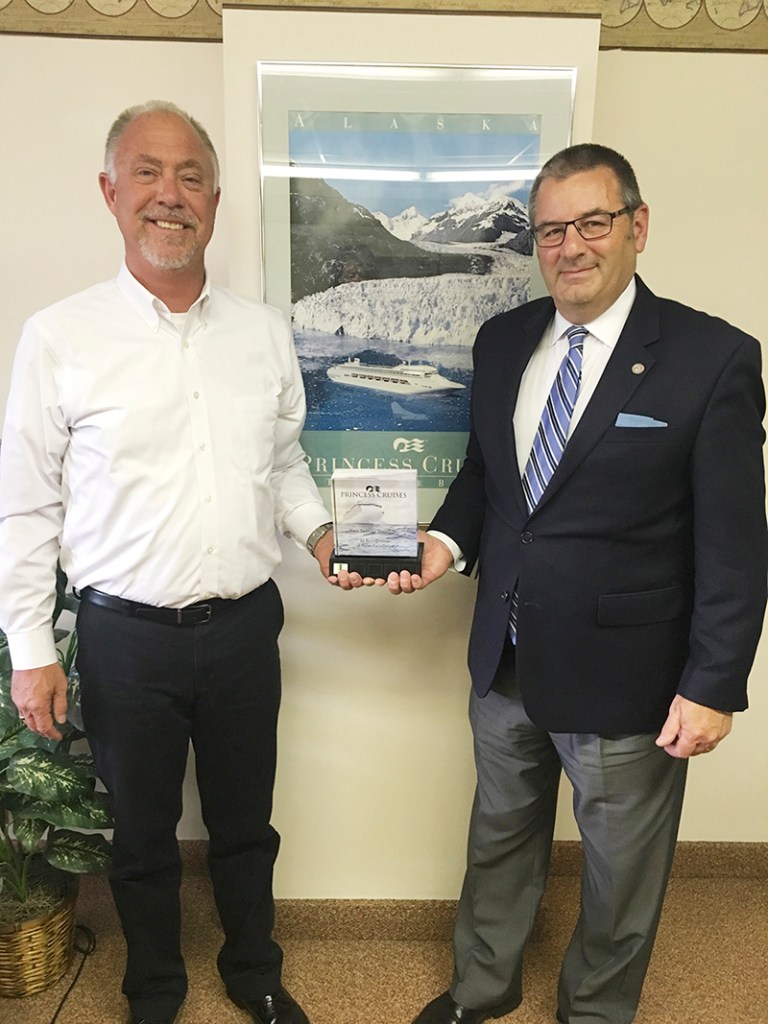 President and owner of 4 Seasons Vacations, David Nelson, left, receives an award for sales excellence from Princess Cruises representative Joe Seeb. 4 Seasons sold the most Princess Cruise trips out of any other travel company in 2016. - Provided

Princess Cruises has awarded its 2016 Sales Excellence Award to 4 Seasons Vacations in Albert Lea for selling the most cruises for both group and individual tours.

Joe Seeb, a local representative of Princess Cruises, was recently in Albert Lea to hand the award off to the president and owner of 4 Seasons, David Nelson.

“We’re very proud of it,” Nelson said. “It shows that we’re doing a great job with our supplier, and we’re achieving some of our goals as a company.

“Princess is one of the most respected cruise lines out there as far as quality of ships, quality of cruises, and the quality of the personnel.”

This award isn’t the first of its kind that 4 Seasons has received. The company has won the award from Princess Cruises nearly every year for the past several years, and in the years they haven’t won it they’ve been right there at the top.

Tour manager Larry Alvey offered his explanation as to why 4 Seasons is continually in the running for the annual sales award.

“Our clients just really like Princess,” Alvery said. “They really do a nice job, they match the profile of our customers very well. Our customers appreciate good service and good quality, which Princess offers both of.”

Although based in Albert Lea, 4 Seasons appeals to many people outside of the local area as well. The company markets to the entire upper Midwest region and has made many sales in Iowa, Wisconsin and South Dakota.

The majority of the cruises that 4 Seasons sells are in a group format. Cruise groups meet in Albert Lea and depart on a motorcoach to the airport. All of the pre-trip accommodations are taken care of as part of the cruise package.

Customers will also be accompanied by a 4 Seasons tour manager, who will be there to help with any questions or concerns on the trip.

“Our job on the cruise is to make sure every need is met,” Nelson said. “Clients are taken care of as far as anything they need assistance with, information about and someone to keep the group together.”