A funeral service will be at 1 p.m. Wednesday at Conner Colonial Chapel, 1008 First Ave. S, in Northwood. The Rev. Lydia Mittag will officiate. Burial will be in Round Prairie Cemetery, in rural Glenville. Visitation will be one hour prior to service at the chapel.

Burnell Bernard Sanderson was born on May 14, 1934, the son of Arnold and Pearl (Kleven) Sanderson in Albert Lea. 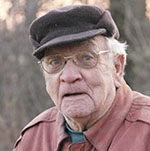 He married Verna Luecht on March 18, 1960, and with this union, Burnell gained two young children, Sheryl and Mark. The couple had four children together, Brenda, Patty Jo, Valerie and Butch. The couple later separated.

Burnell spent his entire life on the farm in rural Freeborn County. He enjoyed spending time with friends at the bowling alley, and in his younger years, he liked to ride motorcycle.

He was preceded in death by his parents, Arnold and Pearl (Kleven) Sanderson, and his brother, Delmar.