Dick Herfindahl: You can never see enough wildlife in Minnesota

After my latest visit to the cabin, I have gained a new awareness for what wildlife can be found literally right at our doorstep. Earlier this spring, I had decided to purchase a trail camera so I could observe what visitors I may have visiting our cabin; both two and four-legged. On this year’s initial visit to the cabin, I was greeted by 4 inches of fresh snow. Now this may not be an earth-shaking revelation, but what I found next was kind of disturbing. There were fresh tire tracks going down the easement drive and, as I followed them, they turned up my driveway and stopped short of the cabin. There were then two sets of footprints in the snow that led to my deck doors, around the cabin stopping at each window and then up the back steps. Though nothing was disturbed, I contacted the Itasca County assessor’s office to see if they had done a routine inspection but they had not and told me to let the sheriff know about it. I did contact them and they were more than willing to come out, but I didn’t feel it was necessary as nothing had been taken. There were no tracks leading to either of the other two cabins and whoever visited had to have a key to the gate. Another mystery that will probably have no answer.

This event is what prompted my purchase of the trail cam — though I have never considered myself paranoid I had been considering getting one for some time. I really like the idea of being able to see what four-legged critters we have in the area. I had put up the trail cam before heading south for the opener and on my return I found the bird feeders, which I had forgotten to take down, were on the ground and one was destroyed. Once I checked the trail cam, I found out what the culprit was – a young black bear. I had written in last week’s column about the bear event, but there was much more than a bear to see on the camera.

I found one or more deer would visit the cabin on a regular basis and there were raccoons which visited nightly. On my initial trip north, I had noticed something had been gnawing on the corners of my back steps. My first thought was a beaver but after talking to my brother-in-law, Lynn, in Alaska, he told me that my beaver theory didn’t sound right. Lynn said that a porcupine would be more likely to do something like that and the trail cam pretty much confirmed his suspicion was right. I also had a fox visit one night, which I thought was pretty cool. When I am up north at the cabin, I now know that though you don’t always see them, there are many critters living in the wild not far away and at night you will sometimes hear them rustling around in the nearby woods.

Our little lake has a pair of resident loons and there are also a pair of trumpeter swans that nest at the far end of our lake. I have spotted an occasional eagle that makes a routine visit to the area. There is also a resident beaver that sometimes makes his presence known in the middle of the night as he slaps his tail on the water which can sound like a big rock being thrown into the lake. We also have a large variety of birds and even a few bushy tailed rodents visiting the feeders which now get taken in at night.

I am almost overwhelmed by all the natural entertainment the area surrounding our cabin has to offer. In this day of fast-paced living, it is indeed nice to just stop and smell the pine needles.

In our area, I have heard of some nice bass being caught on Fountain Lake. This lake, along with some other lakes in the surrounding area, can make for a great fishing experience. Fountain Lake is still hard to beat with an abundant variety of fish you can catch from shore. It’s hard to top a great day outdoors spent at one of our many area parks, with family, fishing, picnicking, playing games or just taking in the beauty of this place we call home.

Until next time, take a little time to enjoy some of the many natural resources we have right here at home. Fishing is a great sport anyone can enjoy without much expense. If you introduce a kid to fishing, he or she will be hooked for life. 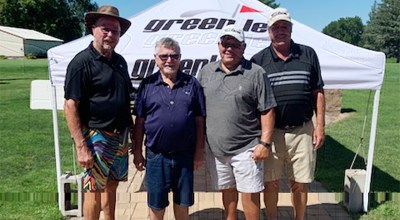