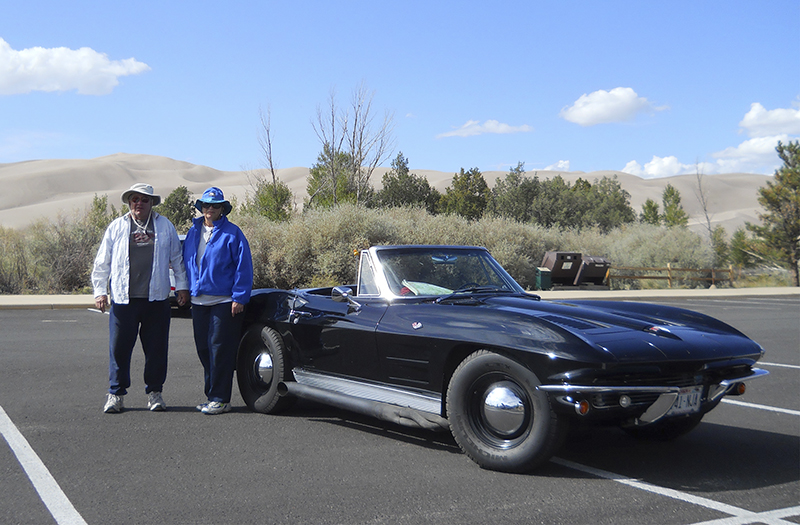 This 1963 triple black Corvette convertible has logged over 548,000 miles with four engines and has driven in all lower 48 states, Washington, D.C., and all of the Canadian provinces. The Corvette will be in Albert Lea along with owner, Steve Stone, for Eddie Cochran Weekend. - Provided

The weekend kicks off Thursday evening with a trip back to the 1950s with The Holy Rocka Rollaz, which will will bring rock ‘n’ roll classics from performers such as Elvis Presley, Buddy Holly, Chuck Berry, Johnny Cash and others. The event will begin at 5:30 p.m. in Fountain Lake Park as part of Thursdays on Fountain.

On Friday evening will be the cruise-in social taking place in front of Country Inn & Suites on East Main Street in Albert Lea. Registration begins at 3 p.m., with the event getting underway at 6 p.m. Cost to attend the social is a donation to the Freeborn County Historical Society.

Also on Friday, the DC Drifters will take the stage at the Marion Ross Performing Arts Center at 7:30 p.m. The DC Drifters have produced a special show solely as a tribute to Cochran, complete with songs as well as stories from Cochran’s life.

According to Denny Charnecki, promoter and lead singer for the band, the show will feature aspects to please all music fans.

“It’s a very good show,” Charnecki said. “The people of Albert Lea are really going to enjoy it, but I think that anyone who enjoys music and wants to see some good rock and roll will love it… This particular show has got extra meaning — it’s coming from the heart of rock ’n’ roll.”

On Saturday is the annual car show on Broadway Avenue. Registration is from 8 to 11:30 a.m.and is $10 per car, with the first 200 registered cars receiving a dash plaque, goodie bag and a shop rag. Eighty awards will be handed out beginning at 2 p.m., and the cruise will start from the Freeborn County Fairgrounds at 4 p.m.

The cruise will follow the same route as last year so people can find a spot along Bridge Avenue or in Edgewater Park along Fountain Lake to watch the classic car cruise.

The museum’s Eddie Cochran and Marion Ross exhibits will be open from 10 a.m. to 4 p.m. on Saturday. A free shuttle will be provided from downtown to the museum. The museum will also be selling root beer floats alongside many other food vendors.

A third night of music will be presented by the Whitesidewalls with a free concert at 7:30 p.m. in Fountain Lake Park The Whitesidewalls are a rock ’n’ roll band that covers many artists from the ’50s and ’60s, including Eddie Cochran, Chuck Berry, Elvis and many more. The 112 on Broadway will provide food and drinks during the concert. If weather threatens the outdoor concert on Saturday evening, it will be moved to the 4-H Building in the fairgrounds.

On both Friday and Saturday, be on the lookout for a triple black 1963 Corvette convertible. Owned by Steve Stone, the Corvette has more than 548,000 miles on it with its fourth engine and has driven in all of the lower 48 states, Washington, D.C., and all of the Canadian provinces.

On the final day of the festival, the Cloverleaf and Lakeview Lions will host a pancake breakfast at the Fairlane Building at the Freeborn County Fairgrounds. The breakfast will begin at 7 a.m. and conclude at 12:30 p.m.

Event organizer Jerry Monson said they are anticipating a great turnout over the weekend and credits the area businesses for the success. He said it couldn’t be done without all of their support.

Whether people come for the cars, music or food, Eddie Cochran Weekend is sure to provide family fun for all ages and tastes.

Albert Lea celebrates Eddie Cochran Weekend to honor the Albert Lea-native who toured the United States as a country music performer in the 1950s. He made the move to rock ’n’ roll with his “Sitting on the Balcony” hit in 1957, which sold more than 1 million copies.

Other Cochran hits include “Summertime Blues,” “C’mon Everybody,” “Something Else” and “Jeannie, Jeannie, Jeannie.” He died on Easter Sunday in 1960 when the cab taking him to Heathrow Airport crashed. 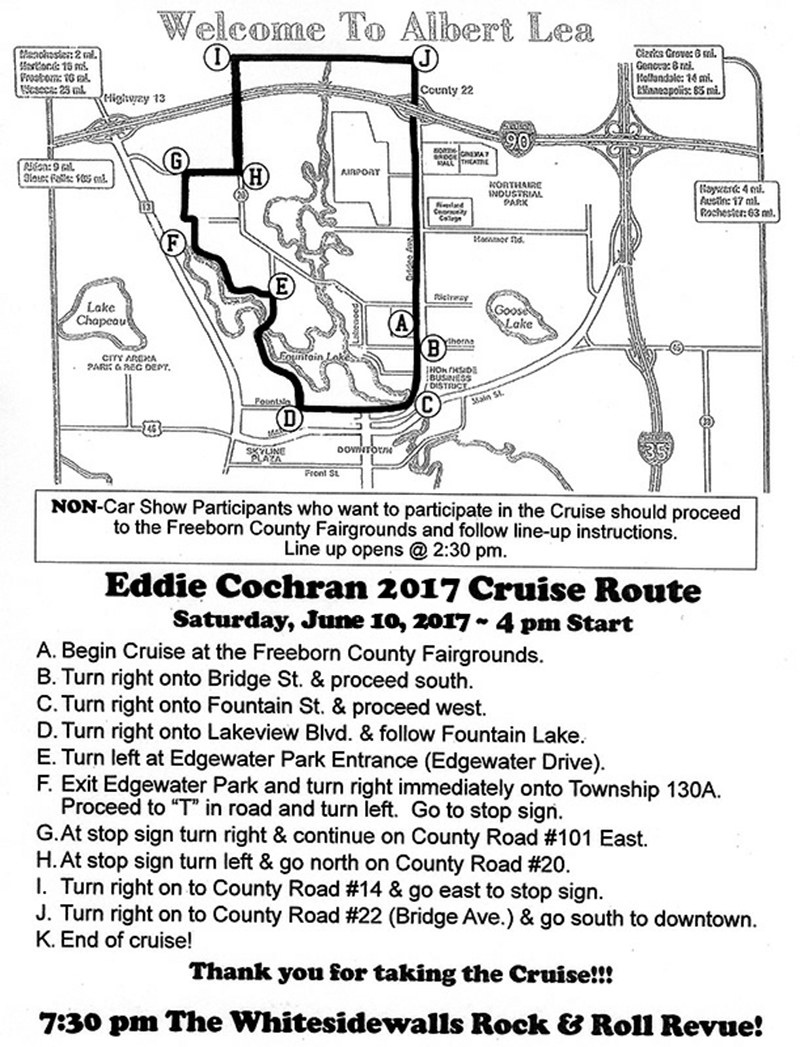