LouAnn Mattick, 77, of Albert Lea, formerly of Kiester, died Saturday, June 3, 2017, at The Meadows Assisted Living in Albert Lea. A funeral service will be at 11 a.m. Wednesday at Our Savior’s Lutheran Church in Kiester. The Rev. Katie Pals will officiate. Visitation will be from 4 to 7 p.m. today at Bruss-Heitner Funeral Home in Wells and continue one hour prior to services at the church on Wednesday. Interment will be at Mansfield Lutheran Cemetery in rural Alden. Bruss-Heitner Funeral Home in Wells is in charge of arrangements. Online condolences may be left at www.brussheitner.com. 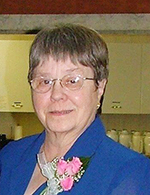 Helen LouAnn was born Aug. 9, 1939, in Worth County, Iowa, the daughter of Hendlyn “Hank” and Evelyn (Butler) Helgeson. LouAnn was united in marriage to Theodore “Ted” Mattick on Feb. 20, 1959, at First Lutheran Church in Northwood, and to this union four children were born. LouAnn was a homemaker who loved to bake, and was also a voracious reader and an Iowa Hawkeye fan until the end. She had a green thumb and could bring plants back to life. She was a faithful sender of birthday and anniversary cards, never forgetting the important dates. After her children were out of high school, LouAnn went back to work as a nurse’s aide at Good Samaritan Society and St. John’s Lutheran Community until retirement.

LouAnn and Ted enjoyed traveling, as they delivered motorhomes all across the United States. The couple had celebrated 56 years of marriage. She was a member of Our Savior’s Lutheran Church and a resident of Kiester for over 50 years. She faithfully attended her grandchildren’s sporting events and activities, as she loved her grandchildren and her great-grandchildren.