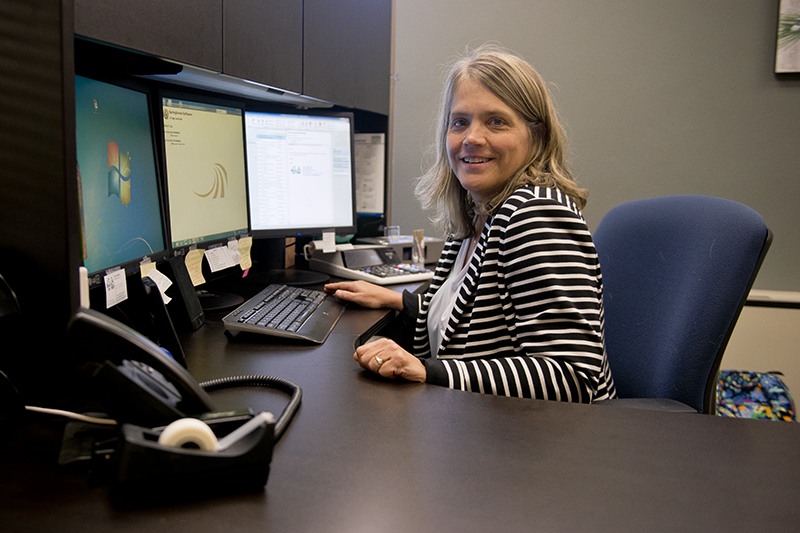 Working in public financing can be difficult. The field includes assessments, bonding and other matters that can cause conflict between community members and government officials. Albert Lea’s finance director is making the job work with her staff and by decades of experience in the profession.

Kristi Brutlag, 54, began her work in Albert Lea in early 2014 to help the finance director at the time, Terry Berg, as the city was converting its software. Berg resigned in June of that year after an allegation about her was made by another employee. Brutlag, who formerly worked as a private contractor, became a full-time employee of the city in March.

“I really like it here — I love the people here,” she said. “I think they’ve got good people, and I like it. I like it here, so I decided just to stay and help them get through the transition and just never left.”

She said she would have welcomed the city hiring a finance director other than her.

“I ended up being the best candidate, I guess,” she said.

Brutlag lives in Dallas and flies to Minnesota every week, where she spends at least two to three days. She also works from home.

Brutlag and her husband, John, have three children, Katie, Bryan and Jake, and a granddaughter, Reagan.

A native of East Grand Forks, Brutlag worked for accounting firm Abdo, Eick & Meyers prior to her work with the city. In that position, she audited cities and performed finance director duties for large and small towns.

“My background is in city government,” she said.

Brutlag said the city’s finance staff is probably the best she has worked with in her career. She spoke highly of accounting supervisor Tanya Harms, who reports to Brutlag.

“They are all knowledgeable, and they are willing to help each other out,” she said. “We are very well cross-trained.

“I have great staff. It makes it easy to come to work.”

In addition to her co-workers, Brutlag said she enjoys looking at processes and long-term planning.

Albert Lea City Manager Chad Adams said Brutlag was selected for the position based on her qualifications, noting the city is not allowed to require a nonemergency employee to live in Albert Lea.

He said Brutlag was selected from four applications, saying, “Kristi had by far the strongest experience in municipal government.”

“She has benefited the city significantly on implementing a long-term financial management plan that has allowed us to more precisely project future revenue and expenses,” Adams said. Ultimately, the plan has assisted our annual budgeting process, which has resulted in no increase in our operating levy for the past five years.”

The city has also advanced cross-training and succession planning in the Finance Department by having Brutlag in the office for more hours during the week, Adams said.

“Both I and other departments also value Kristi’s increased presence on site, which is leading to enhanced communications, planning and collaboration,” he said.