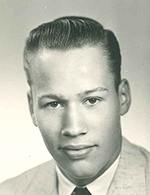 He was born Nov. 26, 1943, in Albert Lea, the son of Gordon and Elsie Ulrich. He was a Vietnam veteran of the U.S. Army 9th infantry and retired from Shelter Insurance as a claim adjuster.

He was preceded in death by his parents and one brother, Gary Dean Ulrich.

A memorial service will be at 1 p.m. Monday at Fort Smith National Cemetery.

Mallory Martin Funeral Home in Sallisaw is handling the arrangements.