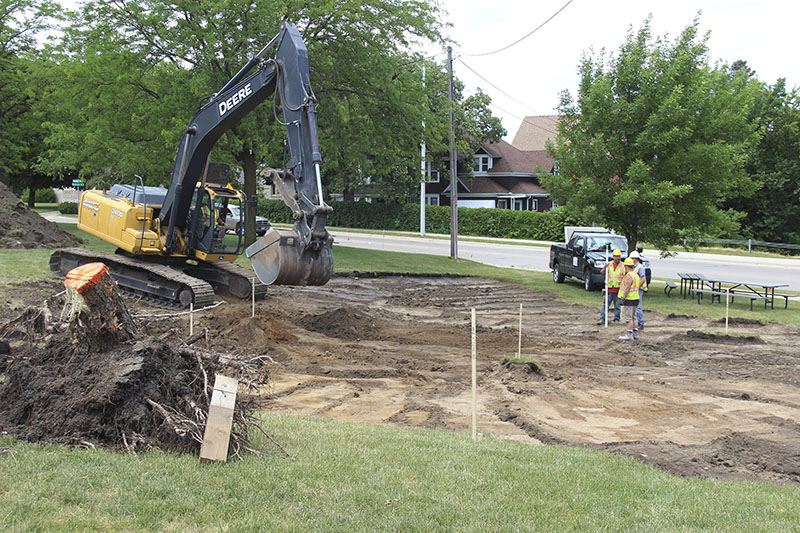 Crews were out working Thursday afternoon at the site of the future Albert Lea splash pad. Sarah Stultz/Albert Lea Tribune

Preliminary work has begun for the splash pad project at the corner of Broadway Avenue and Fountain Street.

This week, crews have extended utilities to the location of the new splash pad, and underground water tanks will be installed, according to Albert Lea City Manager Chad Adams. The tanks are being brought in from another city property in Albert Lea that is no longer in need of them and will store used water. The water will be used by the Albert Lea Parks and Recreation staff to water plans downtown.

Construction on the splash pad itself is slated to begin the week of June 26. According to Adams, the construction will take about five days.

It is unclear at this point if the attraction will be up and running for the Fourth of July, due to the possibility of schedule changes and weather delays.

The splash pad will feature water-shooting jets out of the ground with a fence surrounding the area.

The project is being made possible after a committee of residents raised more than $130,000 through monetary donations and in-kind labor. The Albert Lea City Council gave the green light for the group of volunteers to begin fundraising for the project in February 2016.

Portable bathrooms will be in place near the splash pad for patrons, as well as the general public.

Sentencing for man convicted of state park murder gets…