Al Batt: Aristotle ahead of his time, explains four levels of happiness 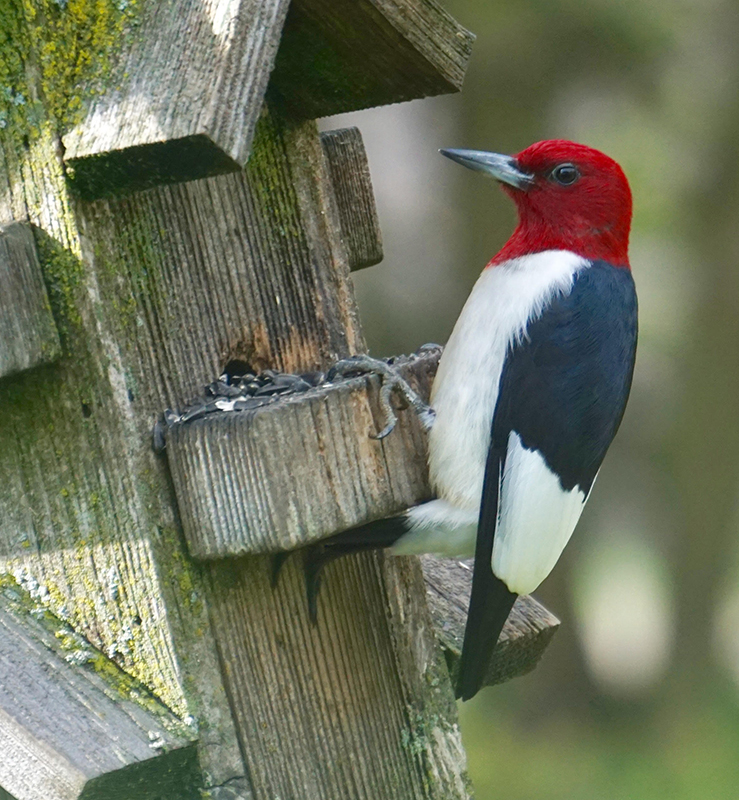 The red-headed woodpecker is a small or medium-sized woodpecker and is listed as near threatened by the International Union for the Conservation of Nature. Al Batt/Albert Lea Tribune

My neighbor Crandall drops by.

“Everything is nearly copacetic. I’m still trying to perfect a square watermelon. Easier stacking and those melons won’t roll away. It will make me filthy rich. One day, I want to be, ‘Let’s just take my Bentley’ wealthy and be able to get refills on my cheeseburgers. Until then, I’ll have to settle for being right 98 percent of the time. Who cares about the other four percent? I got one of those memory foam mattresses, but it doesn’t work. I still can’t remember any of my passwords. I set off all my fireworks early this year. Three in the morning is the perfect time. Sound carries better then. I went for a long walk over the 4th of July. I found myself in a parade.  Luckily, I was ahead of the horses. I didn’t toss a single Tootsie Roll and I still won the award as the fourth best float.

Our yard has certain wildness. It’s an uninhibited landscape. Such a yard and dead limbs make our place the occasional nesting site for red-headed woodpeckers. Our rural neighborhood is blessed by the presence of these lovely birds each year.

I headed out of my driveway and was down the road when a red-headed woodpecker nearly hit my car.

That near miss, which I was so thankful that it was a miss, made me think of Aristotle. I took a class years ago (no, Aristotle didn’t teach it), in which Aristotle was credited with coming up with the four levels of happiness. Here they are as I remember them.

3. Doing good for others.

4. Not having a red-headed woodpecker collide with your car.

Aristotle was ahead of his time.

“How did birds come to be called birds?” It’s believed to come from the Old English bridd or brid, meaning “young bird or nestling.” The Old English word for bird being fugol, which is of uncertain origin. In Middle English, bird referred to young animals, including young humans. “Better one byrde in hande than ten in the wood.” came from 1546. Today, we say, “A bird in the hand is better than two in the bush.” This proverb warns against unnecessary risks. It’s better to keep what you have than to risk getting more and ending with nothing.

“Why don’t I see as many insect splatters on car windshields as I used to?” E. O. Wilson calls insects the little things that run the world. Sometimes, they run into windshields. Insects are less likely to hit the windshield of a slow-moving vehicle. The airflow around the vehicle takes the insects safely away with it. Insect habitats, flight patterns and seasons are certainly factors in influencing how many strike windshields. My windshield doesn’t hit many here in January. The types and shapes of vehicles also help determine how many flying insects that hit grills and windshields. Some people say that today’s cars are more aerodynamic and therefore less lethal to insects. That makes sense, but it’s not true about all cars. What we need is a car that produces an airflow that takes deer away with it.

“What good are vultures?” They clean the environment. In the 1990s, India lost around 95 percent of their vultures due to the anti-inflammatory drug diclofenac, which is lethal to vultures when they consume the carcasses of treated animals. Lacking vultures, India experienced an uptick in feral dogs. The canines aren’t as good at the clean-up job as vultures. The increase in dogs feeding on disease-ridden carcasses is believed to have partially caused a rabies outbreak that killed 48,000 people from 1992 to 2006 in India. Vultures eat the diseases that show up on a carcass. The list of diseases that could result from rotting carcasses is lengthy and includes tuberculosis, anthrax and foot-and-mouth disease. And vultures are really cool.

“Everyone thinks they have the best dog. And none of them are wrong.” — W.R. Purche

“Think left and think right and think low and think high. Oh, the thinks you can think if you only try.” — Dr. Seuss