Al Batt: Feathered torches are an option when the storm clouds roll in 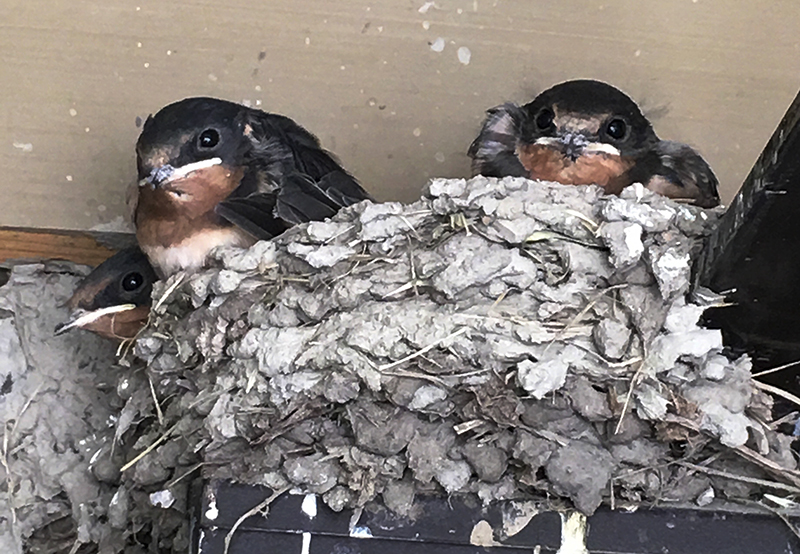 “Everything is nearly copacetic. I’m as fuzzy as a peach. Vitamins should be taking me. When it comes to food, I have all the willpower of a tapeworm. That’s why I raise only vegetables in my garden. Why should I fool around trying to make reluctant flowers grow when the dandelions want to grow?”

It was hot, but not as hot as it could have been. I decided to examine some belly flowers. A belly flower is a small one that requires me to get down on my belly in order to truly appreciate its loveliness.

The belly flowers enchanted me.

Nature provides beauty on so many levels.

I brought back a surprise for myself from Ames. Chigger bites. Chiggers are the larval stage of mites. Chigger bites characteristically cause intense itching and small, reddish welts. Chiggers crawl onto vegetation and attach themselves to passing mammals or people. They wander over the skin surface before attaching at a skin pore or hair follicle. The attachment sites on people are usually places where the clothing fits tightly over the skin or where the skin is thin or wrinkled. Contrary to popular belief, chiggers don’t burrow into the skin nor do they feed on blood. Chiggers inject a digestive fluid that cause skin cells to rupture. The fluids from the skin cells are consumed as food. The injected enzymes cause the skin to become red, swollen and itchy. The itch may last for several days and persist even after the chigger has detached from the skin. Taking a hot, soapy shower or bath immediately after returning from possible chigger-infested areas is a good idea. Most home remedies are ineffective. The widespread myth that using fingernail polish kills the embedded chigger is misguided, as there is no embedded chigger. Better relief comes from products that seal the skin and contain antihistamines.

“How long does it take for an egg to become an adult monarch butterfly?” All insects change in form as they grow. This process is called metamorphosis. Butterflies undergo complete metamorphosis, in which there are four distinct stages: egg, larva (caterpillar), pupa (chrysalis) and adult. Monarch development from egg to adult is completed in about 30 days. The egg stage takes three to four days, ten to fourteen days as a caterpillar and another ten to fourteen days as a chrysalis.

“Why don’t I see or hear western meadowlarks like I used to?” Their breeding populations have declined over 1 percent a year between 1966 and 2015, a cumulative decline of 48 percent according to the North American Breeding Bird Survey. The decline may be caused in part to conversion of grassland breeding and wintering habitat to commercial, housing and agricultural uses. Other factors affecting western meadowlark populations may include pesticide use, habitat degradation due to invasive plant species and fire suppression that alters native grasslands.

“How can I keep bears from getting to my bird feeders?” You could stop feeding the birds when the bears are active. You could place a feeder atop a pole at least 9 feet off the ground and several feet away from the nearest tree trunk. Although it’s sometimes ineffective, it makes it difficult for bears to reach it. There are some commercial armored apparatuses that might work.

“What’s black, has six legs and sounds like a bell?” A dung beetle.

“What does it mean when swallows fly low?” It means that you are mowing your lawn. Barn swallows worship Snapper and Toro for all the flying insects that the grass gobblers scare up. When swallows fly high, the weather will be dry. Swallows flying high mean there’s no rain in the sky. Swallows catch and eat flying insects. In the high air pressure that comes with fair weather, insects may be carried aloft by air currents. Swallows flying near the ground mean a storm will come around. The low air pressure that pulls in stormy weather causes insects to fly close to the ground.

Once upon a time, the seafaring communities of Scotland’s Orkney and Shetland Islands used feathered torches. If they had no oil for a lamp or wax for making a candle, they used a storm petrel. Petrels produce a lot of stomach oils. A tarred string wick was passed through a petrel’s dead body and then lit for use as a candle.

The birds got the name storm petrel because old-time sailors believed their appearance foreshadowed a storm. It’s not certain why the bird is named petrel. One theory is that it’s named after St. Peter who walked on water in the Gospel of Matthew. The petrel’s habit of flying low over water with legs extended gives the appearance that it’s walking on the water.

“The natural flights of the human mind are not from pleasure to pleasure, but from hope to hope.”— Samuel Johnson

“Forgiveness is not an occasional act, it is a constant attitude.” — Martin Luther King Jr.