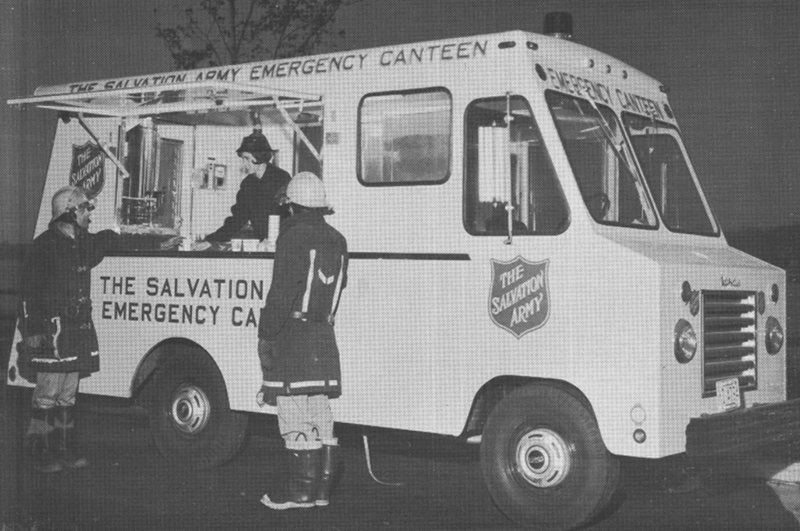 The Salvation Army emergency canteen is pictured here in 1969. The caption of the photo reads “Serving Albert Lea and surrounding communities — Our thanks to the city of Albert Lea for allowing us to house this vehicle in the library garage.” - Provided

Over the past 121 years, the Salvation Army has been an integral part of Albert Lea’s history.

William and Catherine Booth started the Salvation Army in London in the 1850s.

By January 1896, the Salvation Army began its work in Albert Lea as a Swedish Corps. In November 1898, it was transferred to a Midwestern Chief Division. It continued in operation until 1908; in June of that year Albert Lea was dropped from its division. The Corps was re-opened in July 1917, as part of the Minnesota, North and South Dakota Division. The officer in charge was Ensign Ada Taylor. Capt. Bessie Norris was her assistant.

On Oct. 14, 1954, Capt. Robert Flowers broke ground for the construction of the present building at 302 Court St. In April 1955, the east portion of today’s building was dedicated.

On April 29, 1968, during the leadership of Capt. Curtis Grebe, the west portion (gym, offices, classrooms) were in the planning stages.

Funds from Judge Meighen Trust covered the building of the new addition, along with funds from Jerome Funds Estate and a local campaign.

Over the span of 12 decades, events that stand out to the current leadership at the Salvation Army as identifiers are the Christmas toy shop for families and the kettle campaign, daily access to food and their work with emergency disaster relief.

The Salvation Army is the only organization in Albert Lea that serves a hot meal five days a week for free.

Leaders of the Salvation Army call for volunteers and donations

According to the Salvation Army website, the corps’ Northern Division, which serves every county in Minnesota and North Dakota, has nearly 800 employees and 67,888 volunteers serving people in need. The website stated that 82 cents out of every dollar goes directly to help people in need throughout Minnesota and North Dakota. Despite efficiency with monetary donations, the Salvation Army still needs help.

Local Salvation Army leaders cited trends in the cost of living for the increased need for funding and volunteers. This included the increase in recent administrative costs, heat, electricity and facility maintenance for the charity organization.

During the local corps’ “Keep on Serving” Campaign earlier this spring, Maj. Elsie Cline, who was one of the two leaders in Albert Lea until last month, credited the generous community with a well-stocked food pantry and successful annual Christmas and Thanksgiving campaigns. The group expressed their hopefulness to maintain the same services to the community that they currently provide, despite the increased expenses and demand.

“The cost of everything is going up, and so what you were able to budget five years ago just is not going to work anymore,” said Salvation Army Maj. Louise Delano-Sharpe, former corps officer in Albert Lea.

These programs support integration in the community as well as social engagement.

Without the continued support of the community, the organization’s leaders feared their social programs could be downsized or potentially cut completely.

“(The programs) meet the needs of different individuals at different times, so I don’t see one more important than the others,” Delano-Sharpe said.

“You hate to be the one that comes in after the last one is given out. But you just can’t give what you don’t have to give. We did that last year, and we can’t do it anymore.”

“In all that we do, we are motivated by the love of Christ with the hope that we will be able to share this experience with someone else. We do have regular services.”

Someone at the Salvation Army is on call 24 hours a day.

Form a live band once again for Sunday worship. The local corps has had bands in the past to aid in worship.

Host a “Fun night, Date night” once a month where parents can drop their children off at the Salvation Army free of charge without the reservation of finding a reliable babysitter. The night would be home to a safe and fun place for children to play while parents enjoy a night out.

Create more programming for children to grow in faith and creativity.