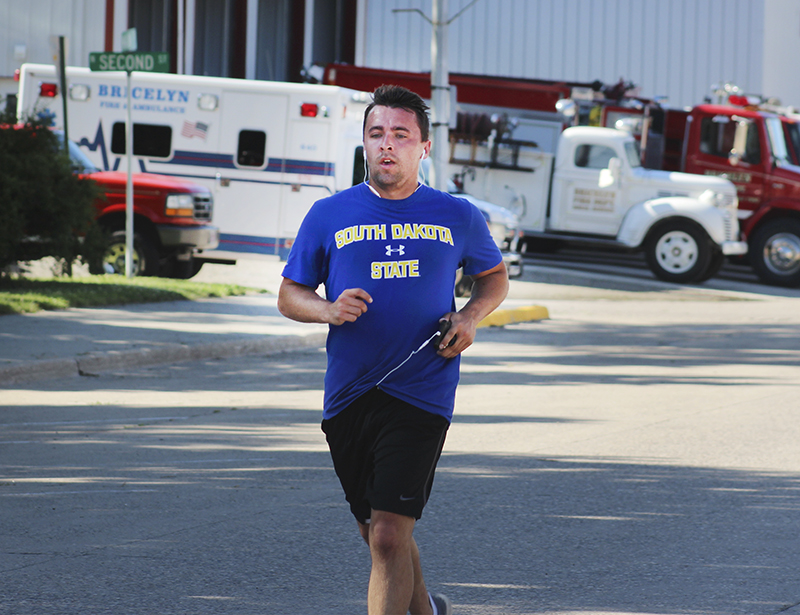 Jalen Snaza is the first to cross the finish line at the Ron Sander Memorial 5k on Saturday in Bricelyn. The run marked the fifth year of the event taking place during Bricelyn’s Fourth of July celebration. - Tyler Julson/Albert Lea Tribune

BRICELYN — People from all across the area came together Saturday morning as part of Bricelyn’s three-day Fourth of July celebration to participate in the Ron Sander Memorial Run.

In its fifth year, the memorial run featured a children’s mile, a fitness walk and the 5k run and walk.

Many people — both young and old, and even a few dogs — came out to run the race and pay tribute to the memory of Sander.

Sander’s youngest daughter and one of the event organizers, Kristin Bullerman, talked about the turnout and what it meant for her and her family to see so many people at the event. 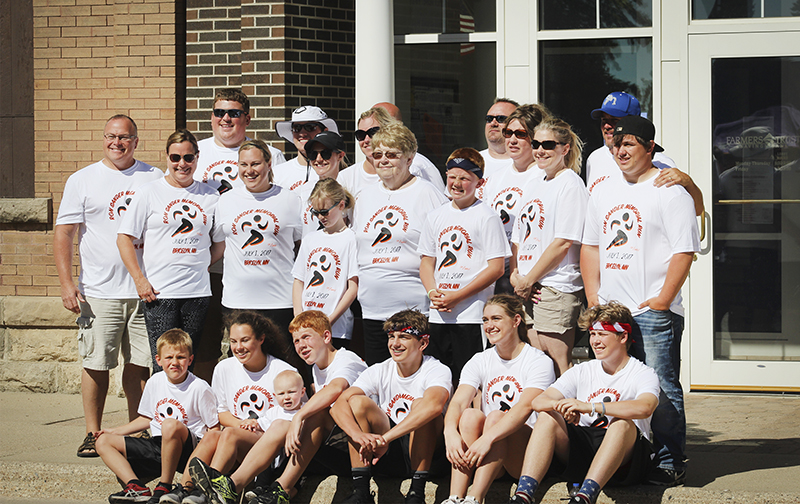 Ron Sander’s wife, children and grandchildren all pose for a picture after the 5k was completed. The run helps to raise money to fund special projects and events in the Bricelyn community. – Tyler Julson/Albert Lea Tribune

“Turnout looks really good. It’s a beautiful morning and I think it’s going to be a great thing,” Bullerman said. “This is such a great way to continue on our dad’s legacy. He was the president of the bank here in Bricelyn for many years; he raised his family here and felt very strongly about the community.”

Participants were asked to pay $20 to enter the 5k with all of the proceeds from the event going back into the community to help fund various projects and events.

Nicole Kapplinger, another one of Sander’s daughters, talked about why they chose a 5k to help honor their father.

“He was an avid walker; everyone used to see him on the road all the time,” Kaplinger said. “He also liked to watch all his kids in track meets, so I think this is something he would have really liked. Plus, it’s a great way to give back to the community he was a part of for so long.”

Aside from the annual 5k run/walk, there are many other festivities going on throughout the weekend. A co-ed sand volleyball tournament, parade, horse show and live music also took place Saturday.

On Sunday the town celebrated with the traditional firefighter’s pancake breakfast and a Bricelyn all-school reunion at the Lutheran church.