Dorothy M. Balder, 94, of Mason City, Iowa, died Saturday, July 8, 2017, at Heritage Care and Rehabilitation Center. A memorial service will take place at a later date. Memorials may be directed to First United Methodist Church, 119 S. Georgia, Mason City, IA 50401 or to the donor’s choice.  Online condolences may be left for the family at www.majorericksonfuneralhome.com. 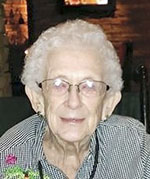 Dorothy Maxine Thevenin Miller Balder was born April 24, 1923, on a farm in Nokomis Township, Buena Vista County, Iowa. Her parents were James Virgil and Ora (Irion) Thevenin.  She was the youngest of six children and was raised on the farm, growing to love animals of all kinds — especially the horses she rode to bring food and drink to her father and brothers as they worked in the fields.

She confirmed her faith when she was 11 years old by joining the Methodist Church in Aurelia, Iowa.  Dorothy attended grade school through 10th grade in Aurelia, Iowa, and graduated from Albert City High School. She attended Tobin Business College in Fort Dodge and traveled to Buffalo, New York, to work in the office of the Spencer Lens Corp. during World War II. She returned to Iowa and worked in the offices of Katz Drug Store and National Battery Co. for the duration of the war.

Her future husband was discharged from the Army in the fall of 1945. Dorothy and Clifford W.  Miller married on Nov. 17, 1945 in the Aurelia Methodist parsonage. They farmed for 14 years in Northwest Iowa and Southern Minnesota. In 1959, they bought the meat processing plant in Thompson, Iowa, known as Miller’s Frozen Foods. In 1974, they sold the Thompson plant and bought a smaller plant in Stratford, Iowa, which they called Miller’s Meats & Processing. These were family-owned businesses, operated with their daughters Dianne and Joan working alongside their parents until the girls reached adulthood and pursued other careers. Clifford died in 1984 in Stratford.

On Oct. 19, 1985, Dorothy married her high school friend, Roy Balder of Pocahontas. They volunteered for Heifer Project International and spent 12 winters on the HPI ranch near Perryville, Arkansas. As Dorothy was a certified lay speaker in both the Iowa and Arkansas conferences, they spent many Sundays in small United Methodist churches that did not have a pastor. She would deliver a sermon and play the piano for the service. Roy died in 2012 in Albert City.

Dorothy was a faithful servant. She taught Sunday School classes, directed choirs, played the organ and served as a church secretary for many years in many different United Methodist churches. She organized quilting groups, senior citizens groups and special events, such as polka services. In addition, she was active in the communities in which she and Cliff had businesses. She served as president of the local Chamber of Commerce and worked on community development committees. Dorothy was a 50-year member of the order of the Eastern Star.

Dorothy was preceded in death by her parents, her husbands, Clifford Miller and Roy Balder, and her siblings Mildred, Freda, Elizabeth (Hazel), Ralph and Merrill.

Arrangements are pending with Major Erickson Funeral Home and Crematory.