Memorial services for Jacqueline K. Anderson, 71, of Albert Lea will be at 2 p.m. Thursday  at Bayview/Freeborn Funeral Home. The Rev. Kent Otterman will officiate. Interment will be at Hillcrest Cemetery. Visitation will be one hour prior to the service at the funeral home on Thursday. Online condolences are welcome at www.bayviewfuneral.com. 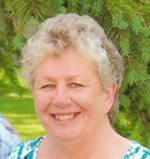 Jacqueline Kaye Anderson was born June 25, 1946, in Owatonna, the daughter of Donald and Isabelle Elaine (Matzke) Lake. She attended Albert Lea High School through the 11th grade and later earned her general education development degree. In June 1963, Jackie was united in marriage to Raymond Anderson in Northwood. She worked at a dime store, was a cook at St. John’s Lutheran Community, worked at an upholstery business for 25 years and was a cook at Good Samaritan Society of Albert Lea. She enjoyed reading, dancing and antiquing.

Jackie was preceded in death by her parents and two brothers, Donny and Dennis.