Funeral services for Mildred “Milly” Larson, 101, of Albert Lea will be at 11 a.m. Thursday at Trinity Lutheran Church. The Rev. Eileen Woyen will officiate. Burial will be at Greenwood Cemetery in Glenville. Visitation will be from 3 to 5 p.m. Wednesday at Bayview/Freeborn Funeral Home and one hour prior to the services at the church. Online condolences are welcome at www.bayviewfuneral.com. 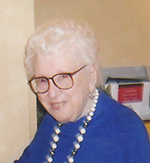 Mildred Larson was born Nov. 19, 1915, near Myrtle,  the daughter of August and Emma (Zarling) Mittag. She was baptized and confirmed at Bethlehem Lutheran Church, where she served as a Sunday school teacher and sang in the church choir. She attended District 59 school through the eighth grade.

Milly was united in marriage to Milford Larson on June 26, 1938, at the church parsonage by the Rev. O.C. Staehling. The marriage was blessed with two daughters, Sharon and Barbara. The Larsons lived on a farm near Hayward for six years, then moved to Albert Lea where the family resided. Milly was a homemaker and worked as a part-time clerk at the downtown J.C. Penny store for over 10 years.

She was a member of Trinity Lutheran Church as well as an associate charter member of Sonland Lutheran Church in Casa Grande, Arizona, where the couple spent many winters in later years. While at Trinity, she was a former altar guild member, Bible study group and charter member of Sunbeam Circle, and in latter years, joined the church sewing group. Milly loved being a homemaker — cooking, serving her meals, crocheting and crafts of all kinds. She also enjoyed traveling with her husband, spending winters in Arizona, Texas and Florida. Milly also served as an active member of the American Cancer Society for several years. She dearly loved her family and was always concerned about them.