Albert Lea’s population is estimated to have increased by nearly 150 people from 2015-16.

“We are attributing the increase to the local business community and the jobs that they are creating, along with the City Council’s partnerships working on workforce housing initiatives,” said Albert Lea City Manager Chad Adams in a press release announcing the population increase.

“For the community, this is very positive news that we have quite significantly reversed the forecasted decline in population by the bureau,” Adams said.

According to the Demographer’s Office, the initial base for the estimates is the most recent census taken every 10 years. The first step of the estimation process is updating the most-recent estimates with any boundary changes in the past year involving population and households, and the primary input for the estimates is building permit data for the year preceding the estimate. According to the Demographer’s Office, for areas not covered by building permits, homestead data from the Minnesota Department of Revenue is used. Available electric utility data, births and deaths are also used to evaluate the estimates. Counts for large group quarters — college dormitories, prisons, jails and regional treatment centers — are also collected each year. 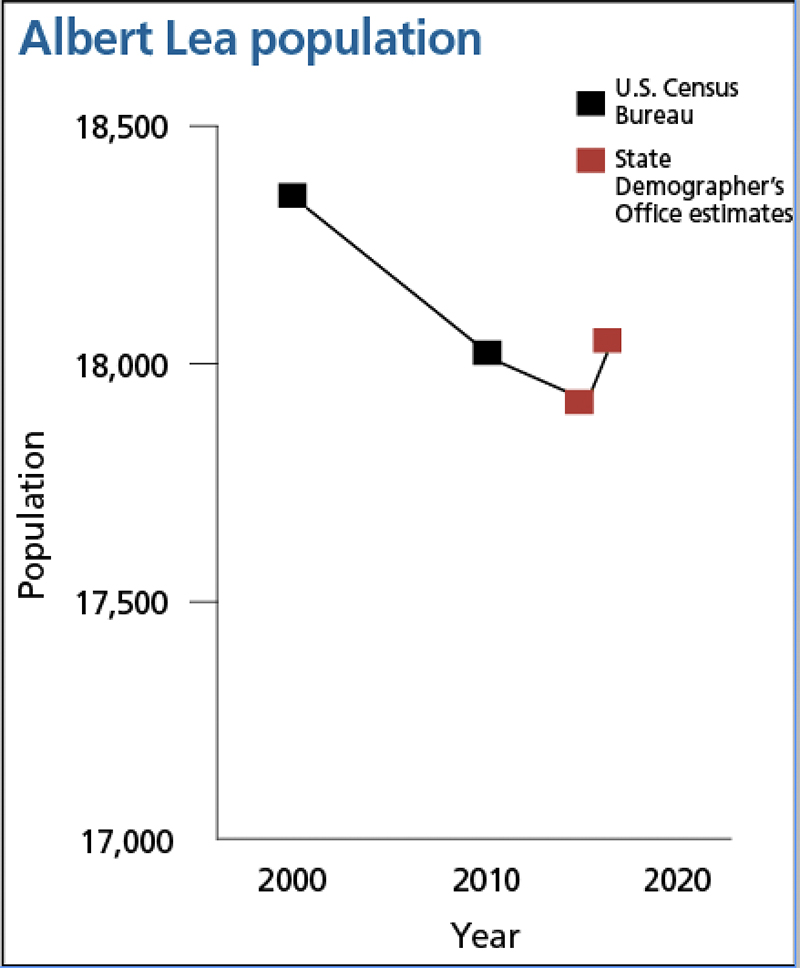 Albert Lea Assistant City Manager Jerry Gabrielatos said the estimated population increase is indicative of the steps being taken to make Albert Lea “a great place to live and work.”

“Where we are taking steps in encouraging growth — the tax abatement policy, everything going on with the quality of life,” he said. “This isn’t a city initiative, but the lakes are improving. We’re investing in infrastructure, and I think we are attuned to what our employers want to see out of the places that they and their staffs live and work.”

Albert Lea’s high quality of life, lakes and its low crime rate make it attractive for people to relocate to the community, Gabrielatos said.

“There’s ample opportunities for recreation,” he said. “There are good schools, there’s low crime. Those are usually things people seek in a new community.”