Richard J. “Dick” Murray, 86, of Claremont was accepted into the Lord’s house on Friday, July 21, 2017, at his home surrounded by his loving family.

As a child, he moved with his family from Claremont, to Plainview, to Mondovi, Wisconsin, and in 1938, back to Claremont. Dick attended country school for six years and Claremont High School, where he graduated with the class of 1949. 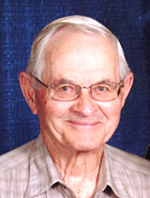 During his schooling he was active in sports, playing football, basketball and baseball, as well as participating in the school band and choir. Following his schooling, Dick worked for local neighbor’s milking cows and helped his father farm.

He joined the United States Navy in 1951 and was honorably discharged in 1955. Upon his return from the Navy in December 1955, he met a beautiful lady, Ruth M. Howieson. On June 6, 1956, they became husband and wife in a ceremony at First Presbyterian Church in Claremont.

Dick was dedicated to his church, First Presbyterian in Claremont, where he served as an elder, a trustee, was known as “Mr. Fix It” and served communion to the shut ins along side his pastor.  He not only supported and served his church family, but continued that support and service to his neighbors. If someone in the neighborhood suffered an injury or experienced a death of a loved one, Dick was the first to lend a helping hand. He never had to be asked; he just showed up. In 2006 Dick was honored as the Claremont Citizen of the Year.

Dick loved sports and was an avid follower of the Minnesota Twins, Vikings and Lynx. He also enjoyed Hogfest festivities, traveling and fishing. Along with his service to his church and community, Dick served on the Hillside Cemetery Board and as treasurer of Claremont American Legion Post 422 for a number of years.

He was preceded in death by parents Andrew and Dora; brothers-in-law James, William, Andrew, John and Ron Howieson; and sister-in-law, Grace Boeke.

Visitation will be from 4 to 7 p.m. today at Michaelson Funeral Home in Owatonna and at the church on Tuesday, one hour prior to the service. A funeral service will be at 10:30 a.m. Tuesday at First Presbyterian Church in Claremont with the Rev. Clint Patterson officiating. Interment will be in the Hillside Cemetery in Claremont with full military honors by Claremont American Legion Post 422. Memorials are preferred to First Presbyterian Church of Claremont or to the donor’s choice.