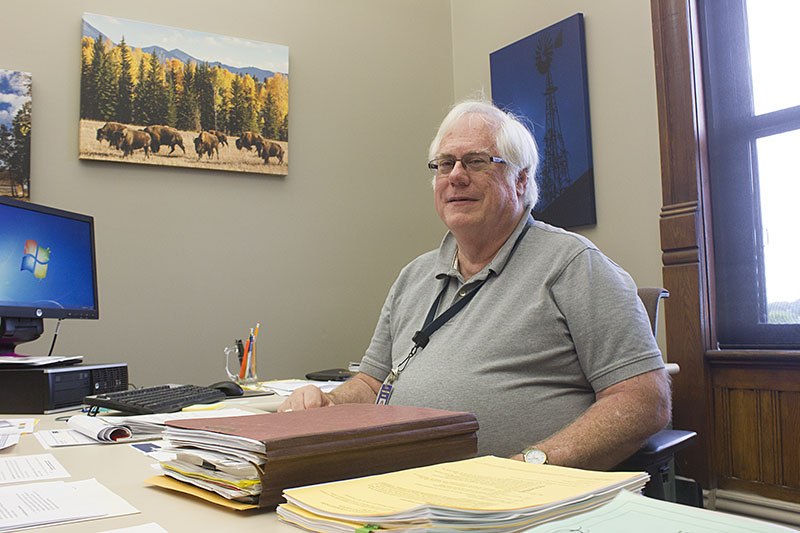 Having one full-time job can be a difficult task. Freeborn County Recorder and Registrar of Titles Kelly Callahan is assuming a second major job to help Freeborn County while officials try to hire a full-time county administrator.

Callahan, 62, was named interim Freeborn County administrator in early May after John Kluever resigned from the position a day after being arrested for allegedly driving while intoxicated in Albert Lea.

In addition to administrative duties he now temporarily has, Callahan has more than 15 years of experience as county recorder. As recorder, Callahan is responsible for all real estate records in Freeborn County. He oversees birth, death and marriage records and conducts other services for the public, such as allowing letters of ordination for ministers and federal and state tax filings through the Minnesota Secretary of State’s Office.

Callahan said he enjoys that no two days are the same in his position.

Callahan said he enjoys working with real estate matters, noting his dad was a real estate auctioneer and an appraiser when interstates 35 and 90 began to cross the region. He said he has noticed major advances in technology since he began as county recorder in 2000.

“More and more, you are seeing that across Minnesota,” he said.

“I think we have done a good job in Freeborn County on spending that money appropriately,” he said.

Callahan and his wife, Susan, have two children, Patrick, 36, and Erin, 32. He enjoys antiques and collectibles, as well as chess — he was a professional chess player while attending the University of Minnesota-Duluth.

Callahan has been elected county recorder four times. He said he enjoys the public service aspect of his position.

“I’ve had a half dozen opportunities to leave here over the years,” he said. “In every case, it would have been more money than I get paid, but I’m into the public service component. I believe that’s where I am at, and that’s why I am around still, to serve the public.”

Interesting fact: Callahan was a professional chess player while in college at University of Minnesota-Duluth