Graveside services for Tamara D. Turvold of Albert Lea will be at 3:30 p.m. Friday at Graceland Cemetery in Albert Lea. Tamara died Tuesday, July 4, 2017, at Good Samaritan Society of Albert Lea. She was 74. 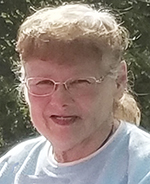 She was born March 18, 1943, in Austin, the daughter of Kermit M. and Deolyn L. (Berg) Olson. Tamara attended Austin High School. On Dec. 25, 1958, she was united in marriage to Harlan D. Turvold, and to this union seven children were born. Throughout her life Tamara lived in Beloit, Illinois; Oakland; Columbus, Georgia; and Austin, before she made Albert Lea her home in 1971.

She worked and retired from Wilson & Co. (Farmstead Foods). In her later years Tamara enjoyed spending time and being with people at Hy-Vee. Her children, grandchildren and great-grandchildren were her life and brought her much joy.