A 40-year-old man reportedly led officers on a chase Monday afternoon in western and northern Freeborn County that ultimately ended when his vehicle collided with another car and he fled into a nearby cornfield. 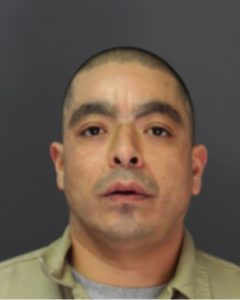 Carlos G. Reyes, no address listed, is being held on a Minnesota Department of Corrections warrant and is expected to be charged with third-degree methamphetamine possession in a school zone and fleeing police in a motor vehicle.

The chase reportedly began when officers with the Albert Lea Police Department tried to pull over Reyes, who was driving a 2003 Chevrolet Silverado with a trailer, at about 1:36 p.m. at the intersection of West Front Street and First Avenue in Albert Lea.

According to police, Reyes was known to be driving the truck and was a fugitive of the Department of Corrections.

Reyes reportedly refused to stop and led officers on the pursuit, reaching speeds of more than 80 mph.

The chase ended near 760th Avenue and 340th Street after Reyes reportedly collided with a 2006 Chevrolet Cobalt, driven by Tara Simon, 22, of rural Ellendale. Simon was injured and taken to Allina Hospital in Owatonna, where she was treated and released.

After the crash, Reyes fled south from his vehicle into a cornfield and was found after a brief search.