Civic Music Association kicks off for next schedule of concerts 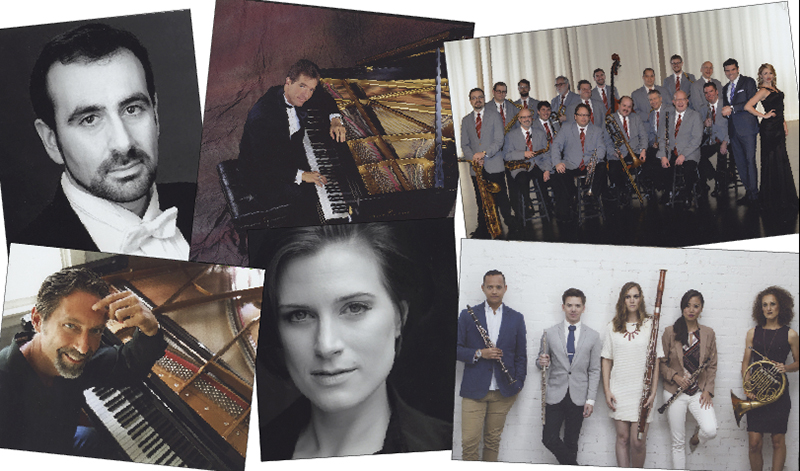 The Albert Lea Civic Music Association recently kicked off the membership drive for its new season of concerts. - Provided

The Albert Lea Civic Music Association recently kicked off the membership drive for its new season of concerts.

Each year the association brings five performances to the stage, ranging from classical to jazz, folk and popular music. There is a mix of instrumental, choral, vocal and dance each year.

One of the organizers, Sue Jorgensen, said the big concert of the year is the Glenn Miller Orchestra, which began in the 1940s and is one of the only touring orchestras.

As in previous years, admission to the concert series is by membership only. The fee for the season is $45 per adult, $15 per student or $95 per family. Along with funding the concert series itself, money raised goes to support scholarships to local students.

In addition to the Albert Lea concerts, local Civic Music members may attend five events in Austin and four in Clear Lake with their season ticket as part of a reciprocity agreement with the Austin Artist Series and the Clear Lake Area Concert Association. All Austin concerts are at Knowlton Auditorium, and all Clear Lake Concerts are at E.B. Stillman Auditorium.

Known as “one of the finest pianists in the United States,” by former President Jimmy Carter, David Osborne’s list of White House performances include presidents Ronald Reagan, Bill Clinton, George W. Bush and Barack Obama administrations. It is no wonder Osborne is known as the “Pianist to the Presidents.”

After being a fixture at Caesars Palace for 12 years, Osborne is now featured at the Petrossian Bar and the Baccarat Bar at the Bellagio Hotel in Las Vegas. His music, which encompasses 22 CDs and record sales near 5 million, includes romantic, classical, jazz, pop, inspirational, patriotic and Broadway show tunes.

This multimedia stage performance features live piano music, a spoken narrative and a video presentation. This visual dimension will accompany both the narrative and music, and will feature Scott Kirby’s original artwork, video footage and photography. It reflects different concepts about small-town American life.

The music in the first half will span 150 years of Americana, including Scott Joplin, Stephen Foster and John Philip Sousa, and continue up to the present. The second half will feature Kirby’s original composition, paintings, photography and narrative exploring historical and visionary dimensions of the American great plains and prairies.

Kirby, who lives in Boulder, Colorado, has completed 75 paintings and 28 piano compositions. He divides his time between composing, painting, performing and teaching.

After working together in multiple operas, baritone Anton Belov and mezzo-soprano Hannah Penn have formed a vocal duo to present a program offering a range of duets and arias as well as Broadway tunes.

Belov’s voice has been called “rich and mellifluous,” by the New York Times, while the Philadelphia Inquirer calls it that of an emerging star. A native of Russia and a graduate of the Juilliard Opera Center, he has appeared with numerous companies and orchestras throughout the United States.

Penn has had a diverse career as a performer of opera, oratorio and Broadway literature. She is frequently praised for her musicality and the timbre of her voice.

Hailed by the Houston Chronicle as “revolutionary chamber musicians,” WindSync is internationally recognized for dramatic and engaging interpretations of classic music.

Dedicated to showcasing contemporary music and expanding wind quintet repertoire, the group relies heavily on a large body of original arrangements of classical masterworks to build innovative and thematic programs and is strongly committed to educational enrichment and promoting arts engagement through concerts.

Formed in 1938, the second Glenn Miller Orchestra began breaking records all up and down the East Coast and was invited to perform at Carnegie Hall with Paul Whitman, Fred Waring and Benny Goodman. Record-breaking recordings included, “Tuxedo Junction,” “Moonlight Serenade” and “Chattanooga Choo Choo.”

The Glenn Miller Orchestra has origins in 1942, when Miller reported for induction into the Army. He was assigned to the Army Air Corps, where he organized the Glenn Miller Army Air Force Band. In late 1943, he and the band were shipped out to England. In less than a year, they made over 800 performances. In the fall of 1944, the band was scheduled to be sent on a six-week tour of Europe to be stationed in Paris. Miller decided to go ahead to make the proper arrangements. On Dec. 15, Miller boarded a transport plane to Paris, never to be seen again.

The Glenn Miller Orchestra continued all the years since and is currently the only full-time touring big band.

The following are the concerts in Austin and Clear Lake:

What: annual membership for season of concerts

Where: memberships available by contacting a board member, online at albertleacivicmusic.com, at the Albert Lea Convention and Visitors Bureau or before each local concert at Albert Lea High School.