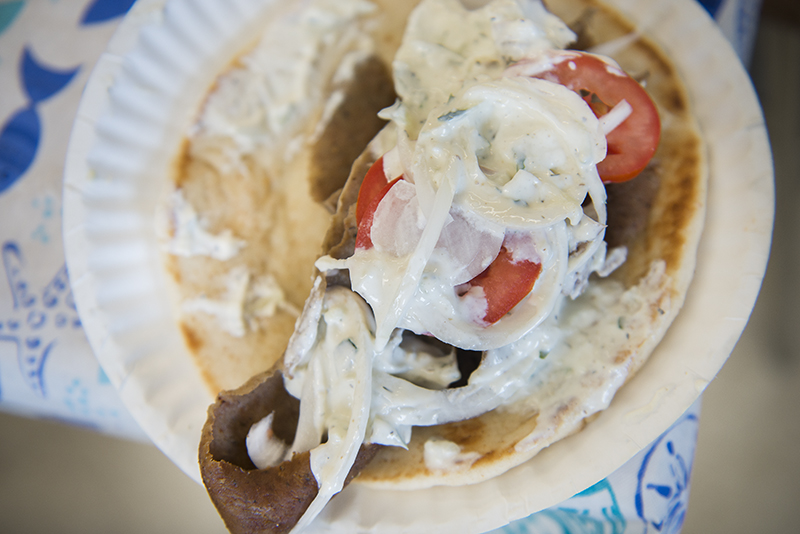 Gyros from Dimitri’s were a staff favorite when a few reporters from the Tribune sampled some Freeborn County Fair food on Tuesday. - Colleen Harrison/Albert Lea Tribune

By Sam Wilmes and Tyler Julson

Here’s what they tested and how the food rated:

Julson: Probably the best food I ate at the fair. Not to say that any of the other food was bad in any way, but this just stood out to me. A warm pita, with freshly shaven meat, topped with sliced tomatoes and onions, finished with a tzatziki sauce. It was incredibly simple and tasted wonderful. This is definitely a stand to check out if you’re in the mood to get away from the traditional fair food.

Wilmes: The gyro — one of the best food options at the Freeborn County Fair — is loaded with meat, onions, tomatoes and tzatziki sauce. The flavors blend perfectly, and having one gyro will make you want to have more before the weekend is over. The gyro I tasted further reinforced its status as one of my favorite foods, and it is a staple food item of mine when I come to the fair.  Shish-kabobs and refreshments are also available at the stand. 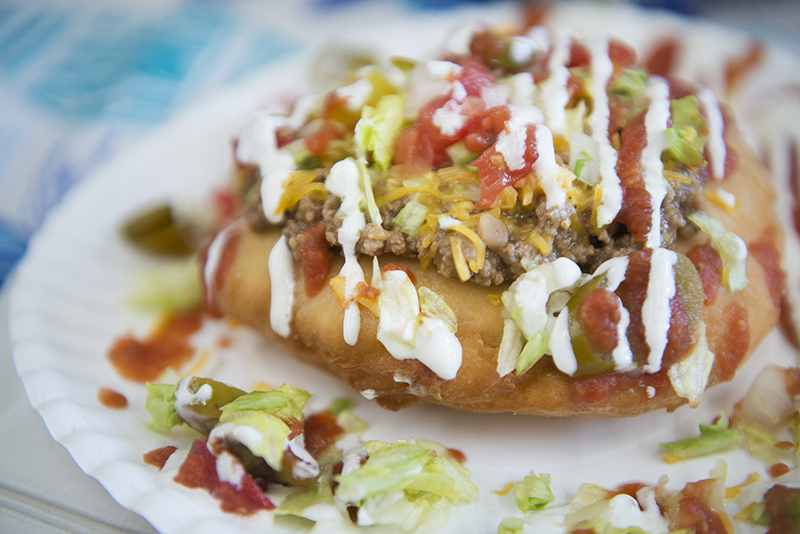 Julson: This was also very good in taste and in visual appeal. I’m not sure what the “crust” was, but it was just the right amount of crispy and light. It was topped with beef, cheese, lettuce, tomato, onions, jalapenos, sour cream and salsa. It was new to me, but it was surely delicious.

Wilmes: I appreciated the available options for the fully-loaded tacos on a thick frybread, including meat, shredded cheese, tomatoes and other items. This food item was a unique option for me — an item I knew I would not be able to try anywhere else in the region. 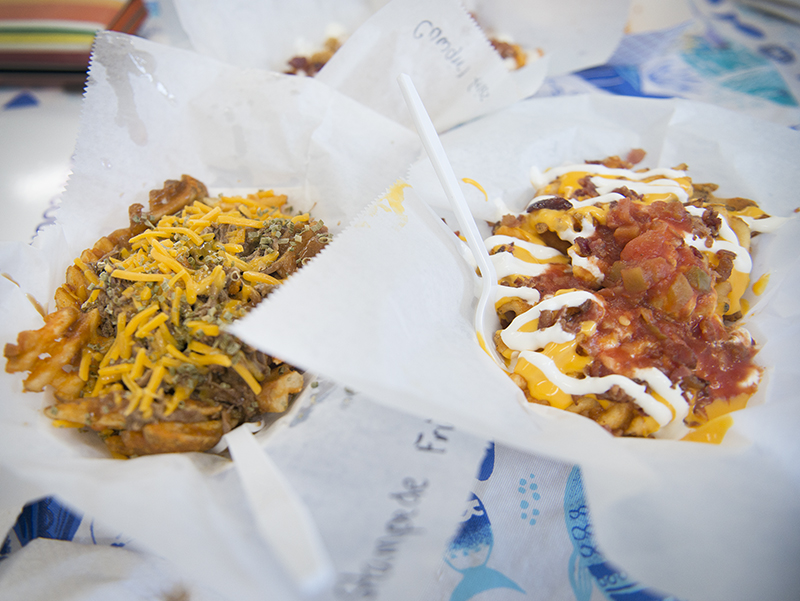 Julson: We sampled three different versions of the fries by the Hanson girls. Cowboy Fries, Cowgirl Fries and Stampede Fries. Each and every one was great. My personal favorite was the Cowgirl Fries, which was waffle fries topped with chicken, bacon and ranch. The Cowboy Fries were topped with chicken, cheese, sour cream and salsa. All three were very good. The fries were cooked perfectly and it was a nice spin on a fried food classic.

Wilmes: The Cowgirl Fries — featuring a blend of ranch, bacon and chicken — were my favorite, though the Cowboy Fries and Stampede Fries were solid choices as well. Though I do not typically eat fries, I would try any of these three options in subsequent visits this year. 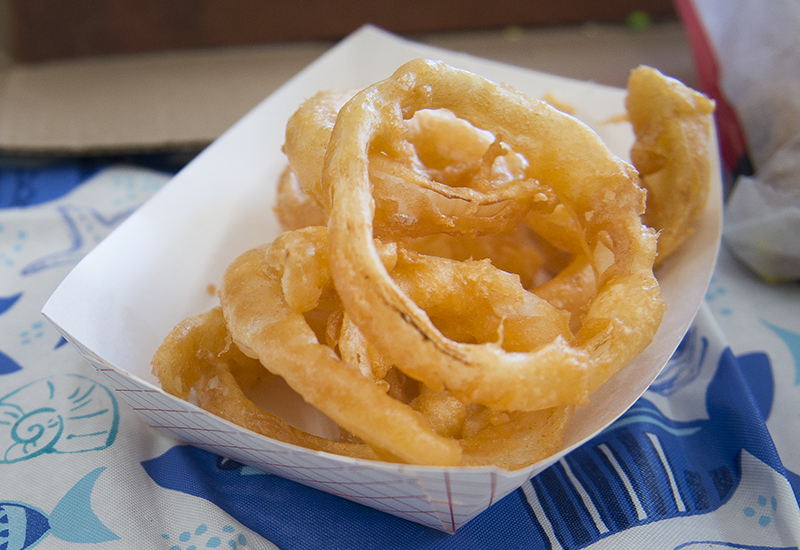 Julson: A classic fair treat. The onions were dipped and cooked fresh at the stand. Perfectly cooked, nice and crunchy on the outside, and I didn’t have the problem where I’d bite down and end up pulling the onion out of the ring. What really made these onion rings stand out was the spicy ranch sauce. They were delicious by themselves, but the ranch really sent them over the top.

Wilmes: The crisp onion rings matched perfectly with a spicy ranch sauce available at Nick’s. The onion rings were crunchy on the inside, and they stayed together well. 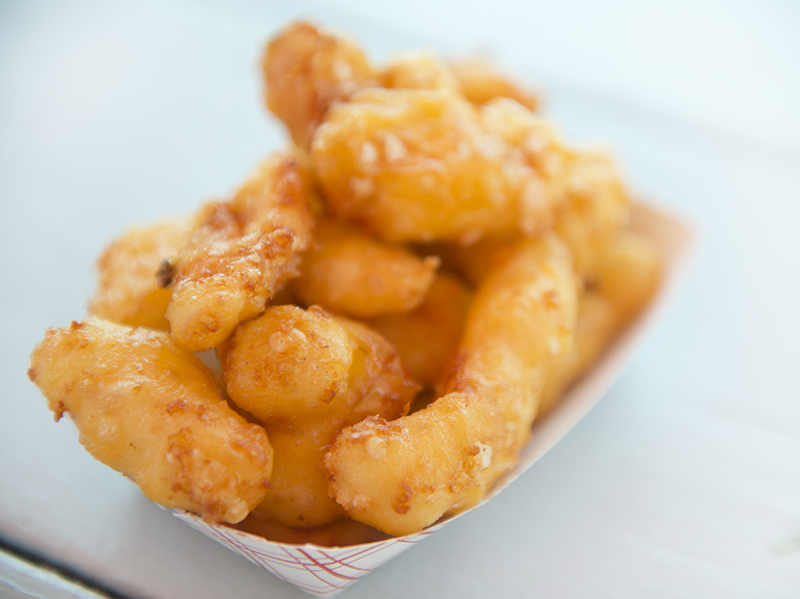 Julson: Another staple at county fairs. These small bites of fried cheese are just how you would remember — heavenly. No ketchup, no ranch, no sauce needed. These curds can stand alone and contend with pretty much everything at the fair. The crunchy outside combined with the soft cheesy inside create the perfect duo.

Wilmes: Another one of my favorite fair foods, these cheese curds were some of the best I have had in a long time. They were fresh, and did not need any topping to be delicious. 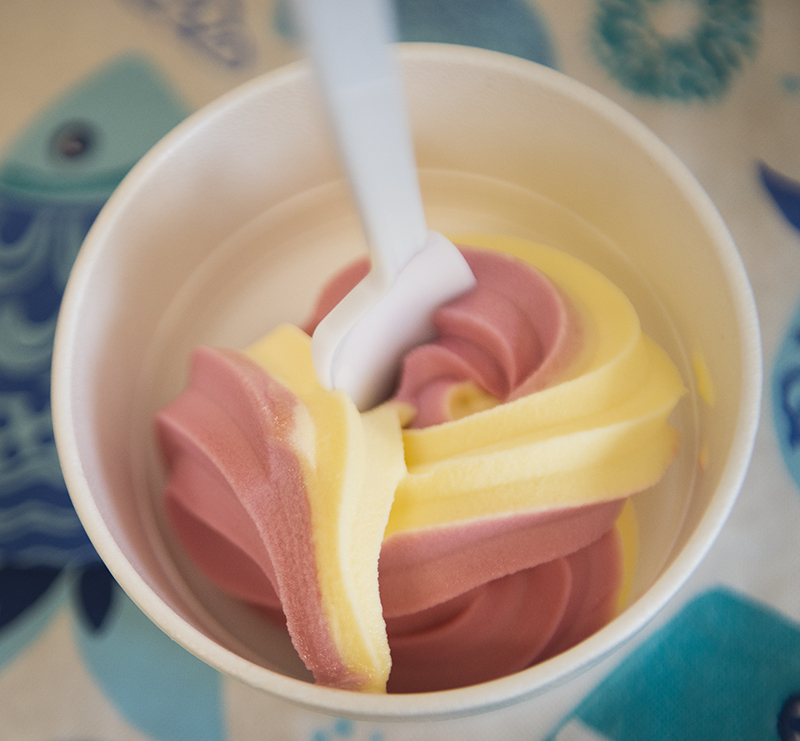 Julson: Great for a sweet and fruity dessert. A soft-serve ice cream type dessert that isn’t actually ice cream. It’s like a twist ice cream dish, except instead of chocolate and vanilla, it’s raspberry and pineapple. It’s lactose-free, and it tastes amazing. It looks exactly like soft-serve ice cream, but has a strong fruity taste. I would definitely recommend this unique take on dessert.

Wilmes: I liked the tart flavor the soft-serve ice cream had. The dessert was a nice way to finish a complete meal at the fair. The unique flavors blended well together, and I would suggest the dessert to anyone who visits the fair this week.