Edwin Richard “Dick” Paul, 92, a native and longtime resident, passed away peacefully with his wife, Kathy, by his side on Saturday, Aug. 12, 2017.

Dick was born at Albert Lea’s Naeve Hospital on Oct. 27, 1924, to Marvyl (Jorgenson) and Ralph Paul. He attended Central Grade School in Albert Lea. His father’s work took him to Kansas, Illinois and Wisconsin. He graduated from Janesville High School in Janesville, Wisconsin. He started college at Milton College in Milton, Wisconsin, and then World War II began. 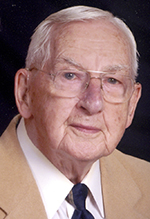 Dick volunteered for the U.S. military at the age of 18, serving from 1942 to 1947. He started in naval aviation, becoming a licensed pilot and receiving his cadet wings. At that point in the war, Naval pilots were not required in great numbers — so his early honorable discharge proved to be short-lived. He was soon drafted into the U.S. Army and served with the occupation forces in Germany. He retired from the Army with the rank of first lieutenant.

Following the war, Dick received a Bachelor of Science degree in 1950 from Milton College. While there, he played basketball, played left tackle on the varsity football team, was president of the veterans group, was a member of Alpha Sigma Phi and had a starring role in “A Midsummer Night’s Dream.”

Upon graduation, he began his 37-year career with Boy Scouts of America, moving to Marshfield, Wisconsin, and becoming field executive for Samoset Council. He helped to form the U.S. Army Reserve unit in Marshfield and received a promotion to captain. He served in the Reserves from 1947 to 1962.

He married Shirley Gies in 1951, and together they had four beautiful children: Michael, Barbara, Mary Sue and William Paul. Following Shirley’s young death, he married Joan Naden (Banals) and became stepfather to Jeffrey and David Naden. The couple later divorced.

He moved his family to Wausau, Wisconsin, where he became Boy Scouts council executive. In 1978, Dick married the woman who became the light and love of his life, Kathleen Sullivan. Dick and Kathy were married for 39 years.

Dick was a registered member of Boy Scouts of America for 75 years, as a youth becoming an Eagle Scout, a volunteer and a professional.

Dick and Kathy moved back home to Albert Lea in 1989, where for seven years they owned and operated Fountain View Inn Bed & Breakfast on Fountain Lake. Dick’s life was centered on service and the values of the Boy Scouts. This was exemplified in his scouting work and amplified over the years with his contributions to countless local service and charity organizations, including the Masonic Lodge, Kiwanis Club, Shrine Club, United Way, Chamber of Commerce, Elks Club, Veterans of Foreign Wars, American Legion, Albert Lea Senior Center and St. John’s Lutheran Community. In recognition of his community leadership, he received Elks Club Citizen of the Year and Freeborn County Outstanding Senior Citizen of the Year awards in 1996.

He served many roles at Salem Lutheran Church in Albert Lea. He was a communion minister and established the church’s endowment fund, which provides needed funding to the church and its mission. Supporting his church and fellowship with its community was of major importance to Dick, and he served as an enormous inspiration to his family for his never-ending love of God.

Dick’s great hobby was playing cards. He found joy in playing bridge and was a true student of the game. He also loved cribbage and was a favorite cribbage teacher — and fierce opponent — for his children, grandchildren and other family members.

Dick was a devoted and adoring father to them all throughout their lives, taking tremendous pleasure in supporting them and watching them blossom and mature.

Dick’s family acknowledges and appreciates the wonderful care given to him by Mayo Clinic Health System Hospice, Freeborn County Veteran’s Service, Leonard Shelhamer, M.D. and his staff, and the skilled and compassionate caregivers at St. John’s Lutheran Community.