Funeral services for Inez Jane Waalkens, 94, of Albert Lea will be at 2 p.m. Friday at Bayview/Freeborn Funeral Home. The Rev. Clayton Balsley will officiate. Interment will be at Hollandale Cemetery at a later date. Visitation will be one hour prior to the service at the funeral home on Friday. Online condolences are welcome at www.bayviewfuneral.com. 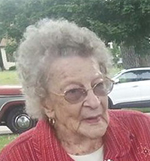 On Sept. 28, 1986, Inez married Henry Waalkens at The Little Brown Church in Nashua, Iowa. She was a member of Calvary Baptist Church. She loved spending time at Myre-Big Island State Park, fishing at the Federal Dam up north, camping, gardening and watching the wrens in her yard.