Lloyd Howard Amundson, 79, of Mankato, formerly of Waldorf, died unexpectedly due to a massive stroke on Tuesday, Aug. 8, 2017, at St. Marys Hospital in Rochester.

Funeral services will be at 11 a.m. Monday at Hosanna Lutheran Church in Mankato. The Rev. Dennis Heiden will officiate. Interment will be in Calvary Cemetery in Mankato. Visitation will be from 2 to 6 p.m. Sunday at the church and continues one hour prior to the service on Monday. Arrangements are with Mankato Mortuary. 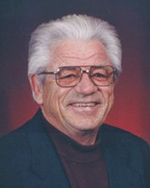 Lloyd was born Jan. 15, 1938, at home in rural Emerald Township. He was the son of Clifford and Loretta (Wendt) Amundson. Lloyd was a 1955 graduate of Wells High School, where he excelled as a Golden Glove boxer.  He was united in marriage to LeAnn Prescher on Dec. 16, 1957, at First Lutheran Church in Wells.

Lloyd was a lifelong farmer near Waldorf. He was co-owner of Waldorf Grain Co. elevator, trucking and fertilizer. He was a member of Hosanna Lutheran Church, the National Farmers Organization (NFO) and the Amber Lane Association Board.

Lloyd received his pilot’s license and enjoyed flying. He was a daily jokester who also enjoyed fishing, hunting, playing cards, dancing with LeAnn and spending time with his family. Lloyd prided himself on teaching his children and grandchildren on how to drive a vehicle, regardless of their age.

He was preceded in death by his parents and a great-granddaughter, Chloe.