Funeral services for Loren M. Krueger of Pine Island will be at 10 a.m. Thursday at the Concordia Pickerel Lake Lutheran Church in rural Albert Lea. The Revs. Peter Soli and Anjanette Bandel will officiate. Visitation will be one hour prior to the service at the church. Interment will be in the church cemetery. 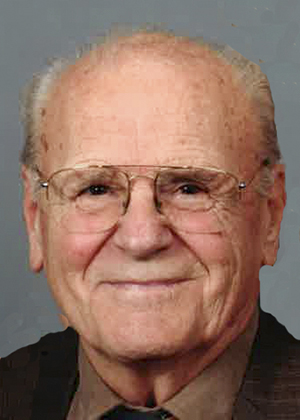 Loren was born Sept. 16, 1923, on the family farm near Albert Lea. He graduated from Albert Lea High School and the University of Minnesota. On Dec. 16, 1945, he was united in marriage to Dorothy E. Dahlen after having met on a blind date. To this union four children were born. Together they lived in Albert Lea for 17 years before moving to Rochester. Over the many years of marriage they traveled extensively all over the world.

Loren was a member of the Bethel Lutheran Church in Rochester and had been baptized and confirmed at Concordia Pickerel Lake Lutheran Church. He worked in Albert Lea repairing TVs and radios on Clark Street, spent time farming and then worked as a supervisor with Mayo Clinic in medical research for over 24 years. Loren loved astronomy and had taken many trips in several countries to view the solar eclipse.

He was preceded in death by his parents; wife, Dorothy, in 2016; and five brothers.