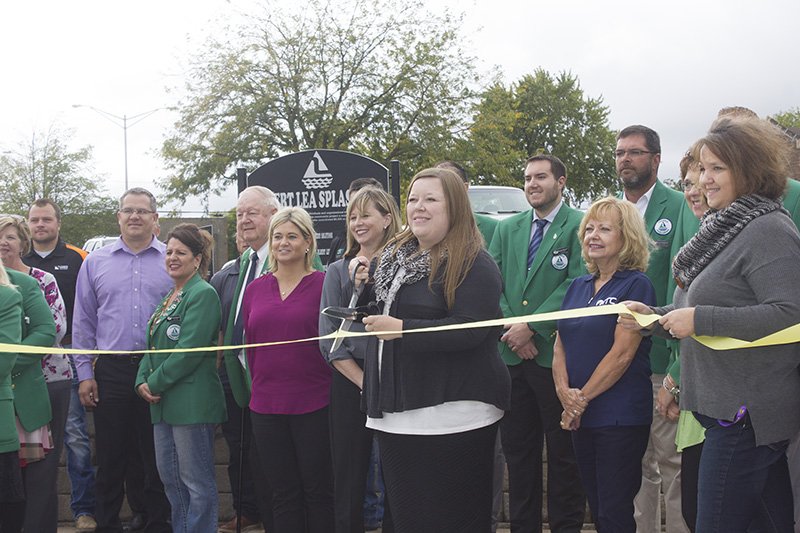 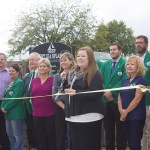 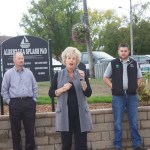 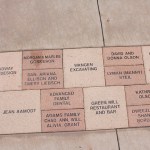 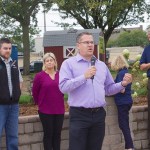 Albert Lea City Manager Chad Adams recognizes the community for its effort in raising money to open the splash pad at the intersection of Broadway Avenue and Fountain Street. — Sam Wilmes/Albert Lea Tribune

The Albert Lea splash pad was officially recognized as a new part of the community on Tuesday after $152,000 was raised for the project by organizations and individuals.

A ribbon-cutting ceremony was Tuesday at the site of the splash pad at the intersection of Broadway Avenue and Fountain Street.

ITC Midwest and Merna Sunde Trust are commemorated on site for being $25,000 donors. The Noon Kiwanis Club, Invenergy Wind Development, Lou-Rich, Cargill Meat Solutions, the city of Albert Lea, Minnesota Community Foundation (Kenneth Olson Foundation), Sanco Equipment, Albert B. Cuppage Foundation and the Mayo Foundation are recognized as giving at least $5,000. Bricks at the site commemorate other donors to the project.

“This was a dream when the streetscape was born, and now it has become a reality,” she said.

The ceremony came a little more than a month after the splash pad became operational.

Albert Lea Recreation Director Bob Furland spoke highly of the positive effects the splash pad has already had on the community after the ceremony.

“The splash pad’s been a great thing for the community,” he said. “It’s fun to drive past, especially last weekend when there (were) 60,70 people here. It’s just another great community meeting spot, and it’s good to see everybody out at the opening … it’s just a wonderful thing for the whole city.”

After the ceremony, Krista Tanner, president of ITC Midwest, said the city of Albert Lea has welcomed the company since it arrived in the community nine years ago.

“It’s nice to give some of that back,” she said.

Some of the donations made to the splash pad were in honor of Sophie Stultz, an 8-year-old Albert Lea girl who was killed when a bike she was riding collided with a car in July 2016 at the intersection of Eighth Street and Frank Hall Drive.

Stultz’s mother, Sarah Stultz, said she appreciates that her daughter’s memory will live on through the project.

“There’s no doubt she would have loved it,” she said.

Stultz, managing editor of the Tribune, said she became a splash pad committee member as a mother to bring something new for children in the community.

“I hope it can add joy to the lives of the children in Albert Lea,” she said.

“This project is a testament to what can be done if a group of determined people come together with a common goal to better the community. We appreciate the hundreds of people who contributed time and money to make this project a reality.”