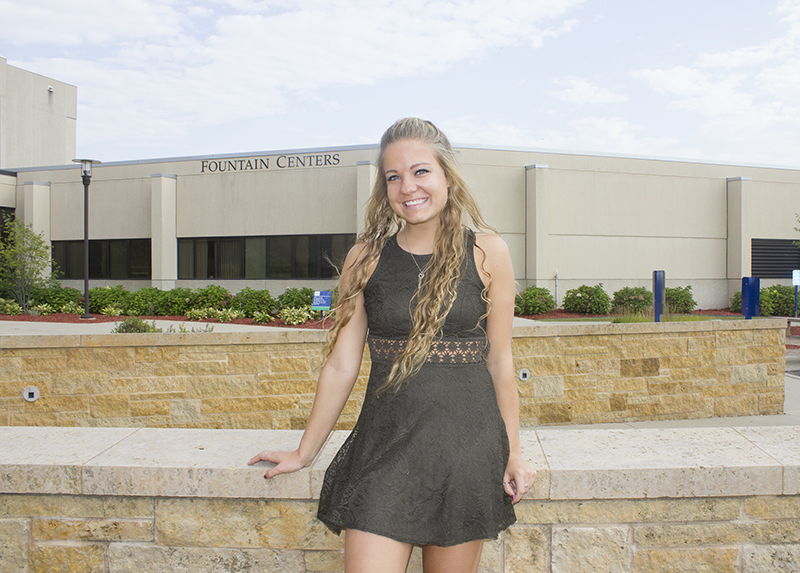 Mercedes Saltou is using her natural talent and ability to empathize with others to help people in Mankato and Albert Lea. — Sam Wilmes/Albert Lea Tribune

Less than 20 years ago, Mercedes Saltou was born 10 weeks early with a severe brain bleed, which resulted in the possibility of her suffering long-term complications.

Today, she has plans to become a doctor and is helping Mankato and Albert Lea communities selflessly.

Saltou, 19, is an undergraduate student at Minnesota State University-Mankato studying biomedical science. She plans to attend a two-year physician assistant school after graduation, with the goal of eventually becoming an orthopedic surgeon. She is a sorority member at Gamma Phi Beta.

Saltou recalled the path that helped her overcome the condition she was born with. Her parents, Jason and Dayna, contacted the pastor at Grace Lutheran Church following the news that she had a brain bleed. The pastor came to the hospital she was at in Rochester, placed holy water on her and prayed.

“A couple days after the pastor was there, the doctors came to check on how my head was doing, and it was gone,” Mercedes Saltou said. “I was a perfectly normal, healthy baby. There (was) no sign of me ever having that, ever.”

Today, Saltou is a certified nursing assistant at St. John’s, a tennis instructor in Albert Lea and a waitress at Wedgewood Cove when she is home, and she plans to soon begin working at another health care job in Mankato.

A 2016 graduate of Albert Lea High School, Saltou played four years on the varsity girls’ tennis team and participated in track and field. She was also an accomplished student in high school, securing college credits at Riverland Community College.

Saltou job shadowed last winter for two days at Mayo Clinic Health System under the tutelage of physician assistant Brie Tubbs and Michael Eckstrom, an orthopedic surgeon at the hospital. She said she became aware during that time of the professional path she wanted to take.

During the first day of job shadowing, Saltou witnessed people who were undergoing operations. The second day, she met patients who were being seen at the hospital.

She credited Albert Lea Greater Education Project Director Jean Eaton for helping connect her to job shadowing and her parents for helping her realize the career path she wanted to take.

“If my parents never would have told Jean, or talked to the doctors way up in the Cities, I would have never even known becoming a physician assistant was even a thing,” she said.

Tubbs still contacts Saltou and helps her through the difficulties she faces at school.

Though Saltou said she felt Albert Lea was too small with not enough fun things to do when she was younger, she now has a new appreciation for the kind people the town has. Saltou and her sister, Lexus, attend church with their grandfather, Cliff Engebretson, when she is at home.

“After I went to college — my first year, 1 1/2 (years) right now — I came back and I was like, ‘Albert Lea’s really not that bad.’ It’s not a bad town at all. I actually do like it. I like it now because I left it for a while and came back to it. It’s a nice community.”