Gloria Janet Simonson was born June 5, 1924, at the family home near Sargeant, to George and Ragnhild (Nesheim) Simonson. She grew up in the Sargeant area with three sisters and two brothers. Gloria attended country school and graduated from Hayfield High School. 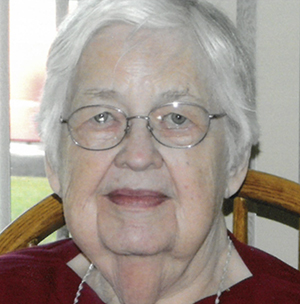 She had jobs in both Rochester and Austin. While working at Hormel, she enjoyed going dancing on Friday and Saturday nights with her girlfriends. At one of those dances, Gloria met her future husband, Stanley Jacobson. On April 7, 1946, Gloria and Stanley were united in marriage at Evanger Lutheran Church, where she was also baptized and confirmed. They had been members of St. Olaf Lutheran Church since 1958. Gloria loved being a wife and mother to their four children. Some of the grandkids even called her ‘Cookie Grandma.’ She seemed to know everyone’s favorite thing to eat, so all of her family would get spoiled at times. The Jacobsons had a large garden, and Gloria did a lot of canning and freezing of their crops. Each summer, the Jacobson family would head up north with their boat for a week of fishing.  They tried to get to as many lutefisk dinners as possible each fall. Of course, each one was the best.  After Stanley passed away, Gloria lived at the Courtyard Apartments and made many friends there. In later years, she spent many good times with her lifelong friend, Leslie Jensen. Gloria will be dearly missed by her friends and family.

Funeral services will be at 1:30 p.m. Sunday at St. Olaf Lutheran Church in Austin. The Rev. Mark Niethammer will officiate. There will be a visitation from 4 to 7 p.m. Saturday at Worlein Funeral Home in Austin, and one hour prior to the service at the church on Sunday.  Interment will be in Red Oak Grove Lutheran Cemetery.  Services were prearranged and will be performed by Worlein Funeral Home of Austin. Condolences may be expressed to the family online at www.worlein.com.