Funeral services for Helen Christopherson, 96, of the Freeborn-Hartland area will be at 3 p.m. Monday at West Freeborn Lutheran Church. The Rev. Steven Schwartz will officiate. Visitation will be from 4 to 6 p.m. Sunday at Bonnerup Funeral Service in Albert Lea, as well as one hour prior to the service at the church. 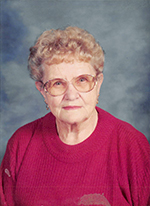 Helen died Thursday, Sept. 21, 2017, at Good Samaritan Society of Albert Lea, where she was a resident the last two months.

Helen Alvina (Hansen) Christopherson was born Dec. 29, 1920, in Dexter, the youngest child of Hans and Ada (Noreen) Hansen. The family moved to the farm on the east shore of Freeborn Lake when she was 18 months old. She grew up helping on the farm and attending District 16 School. Her favorite stories of those years were of playing “kittenball” and various races she won.

On Oct. 7, 1940, she was united in marriage to Herman Christopherson. To this union, three children were born: Dale, Judy and Robert. They farmed east of Freeborn, where she worked alongside her husband. She was a member of West Freeborn Lutheran Church and the Ladies Aid. She enjoyed her family and all the family gatherings. Her pastimes included embroidery, patching and her most favorite — playing cards.

She was preceded in death by her husband in 1988; her son, Robert, in 2009; her parents; brother, Inghart Hansen; sister, Margaret (Serinus) Miller; and sisters and brothers-in-law Gerhardt and Minnie Christopherson, Clair and Ruth Christopherson, and Orten and Violet Christopherson.