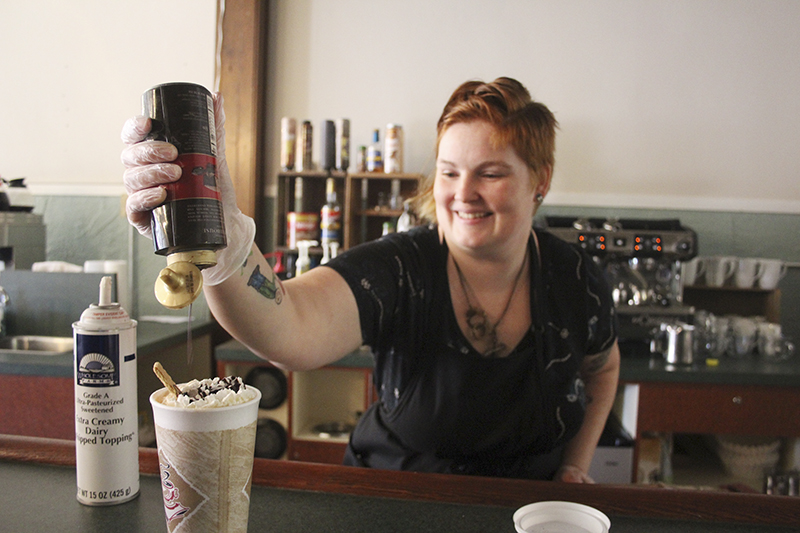 Owner hopes to have something for everyone

NORTHWOOD — While Albert Lea resident Julie Gore nestles into the couch with her heavy porcelain coffee mug Friday morning, she doesn’t know yet whether her father has passed his driving test.

She’s not even one block down from the DMV at the Bean & Bistro, Northwood’s newest coffee and cafe establishment. And according to owner Jenni Lombard, who opened the Bean & Bistro on Sept. 13, Gore is engaging in the exact activity Lombard hoped to see.

“We were really wanting to open a place where people could hang out,” Lombard said. 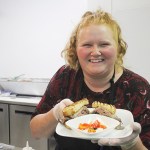 Chef Andrea Berger prepares a sandwich for her co-worker at the Bean & Bistro in Northwood. Sarah Kocher/Albert Lea Tribune 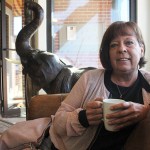 Julie Gore travels to Northwood three times a week to see relatives. On Friday, she stopped in to the Bean & Bistro. Sarah Kocher/Albert Lea Tribune 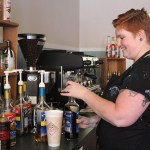 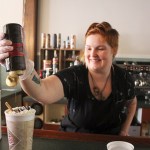 They also wanted a place where people could eat.

“We want people to come in and be like, ‘Oh, yes! They have something for me,’” Bean & Bistro chef Andrea Berger said. Berger is also the one whose singing voice you’ll hear floating in from the kitchen while she’s preparing food. On Friday, it was a duet with Kacey Musgraves, both harmonizing with the coffee grinder.

Lombard cites her East Coast influence as a contributor to the flavor profile.

“It’s definitely a different type of cuisine for this area,” she said.

The cloud bread is gluten free and sugar free. As soup season approaches, the Bean & Bistro hopes to collaborate with a local brewery to craft a beer cheese offering. The salad dressings are all made from scratch with Truvia instead of sugar in an attempt to walk a little bit on the healthier side, Berger said.

But the cheesy potatoes that Lombard makes? Berger paused.

“They are not low cal, I can tell you that,” she said.

Lombard and Berger are not afraid to experiment.

“I do a ton of research,” Berger said. “Hours a day, sometimes. I don’t sleep too well, so I spend a lot of time researching stuff. We do some funky things.”

This experimentation is something customer Kathy Thrond likes about Bean & Bistro.

“(Lombard) will surprise you with something, and I trust her with that,” Thrond said. “I come in here and she’ll say, ‘Want me to mix you up something fabulous?’”

Lombard and Berger are experimenting further to rise to Bean & Bistro’s current challenge: catering to a large lunch crowd.

“There’s days when we have 70 to 80 people for lunch,” Berger said. “So that’s been our best success and also our greatest challenge — planning for the crowd. … Lunch is insane here.”

Lombard and Berger have settled on a Wednesday lunchtime buffet to streamline lunch time and allow customers to try more menu items.

The Bean & Bistro is the second incarnation of Lombard’s business dreams. Originally, she had an antique store called Finders Keepers, where the antiques were for sale and the coffee was for free. Some antiques have stayed with Lombard in the Bean & Bistro. Two weathered wood posts from India stand like sentinels on either side of the interior front door. An end table detailed with elephants rests placidly next to the mahogany brown leather couch where Julie sits, and hiding in a corner near the counter is an antique Quaker table.

Some of the customers have stayed with Lombard, too. Thrond has known Lombard for six years, since Thrond was a regular at Finders Keepers.

Some of the customers are new, too, and meet Lombard’s hope to bring in eaters from out of town. One was Wally Korth, who held up a small plastic cup, half-full but with its caramel-colored brown contents smudged tight against the lid.

Korth, his daughter and his wife leave their table beneath a wall hanging with canvas prints, each featuring local people and a coffee cup. It’s part of the personal atmosphere Lombard noticed from smaller restaurants in the East.

It’s an ambience that Gore can get behind.

“It’s just lighter,” Gore said. “I don’t feel like I have to come in for a whole meal. I can come in and have a cup of coffee and a cookie and be comfortable.”

And, of course, she can look out the window for her father, who is still finishing his driving test.