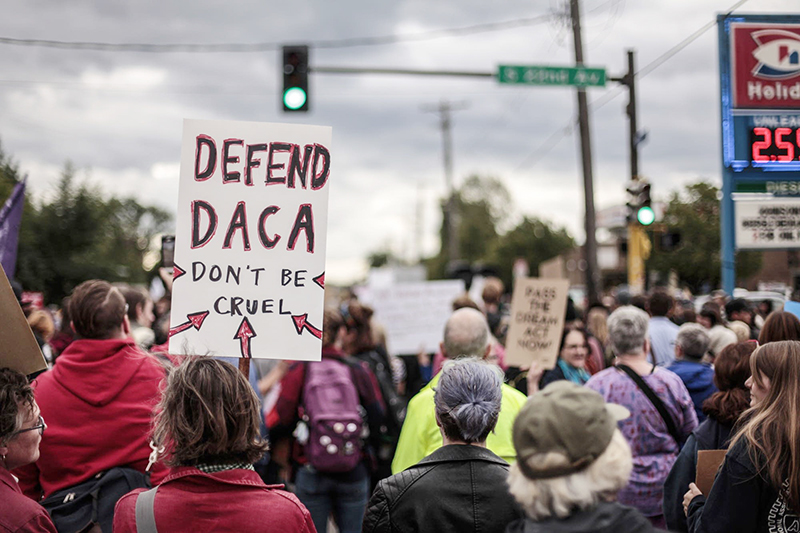 Though they share an uncertain future in common, the paths that brought these young people to Minnesota are all different. - Maria Alejandra Cardona/MPR News

It has been two weeks since Attorney General Jeff Sessions announced the end of the federal program that gave children of undocumented immigrants protected status. DACA, or Deferred Action for Childhood Arrivals, has allowed hundreds of thousands to work, attend college or serve in the U.S. military.

Federal data show that, nationally, nearly all the “Dreamers” are from Latin America, with 79 percent from Mexico.

The racial breakdown of DACA recipients in Minnesota isn’t known, but Twin Cities immigration attorneys said the undocumented youth they represent come not only from Latin America, but also from Europe, Asia and Africa. More than 6,200 young people in Minnesota have been granted DACA status. A similar number might have qualified for the program but never applied.

She was 20 when she entered the United States, and DACA covers only those who arrived before reaching age 16. The vulnerability that DACA recipients are feeling is familiar territory to her, though she insists she is not afraid.

“This country depends on the immigrant community,” she said. “And this country needs to recognize that.”

She doesn’t usually volunteer that she’s undocumented and not enrolled in DACA, but she said she wants to stop hiding and start organizing. She recently joined Movimiento Cosecha, a national group that seeks permanent protection for the estimated 11 million undocumented immigrants in the United States.

“I like to do this type of job because it creates hope for my community,” she said. “I can see how my people are fighting for what we deserve, justice and liberation. We bring many good things to this country. We bring beauty. We build up the economy. We create jobs. We do a lot for this country, so it’s not fair that they do this to us.”

But other undocumented individuals are afraid. Three Minnesotans enrolled in DACA agreed to be interviewed on condition that MPR News use only their first names, because their parents or siblings are in the country without authorization.

Daisy, 21, is from East Africa. She had no idea she was undocumented until she was in eighth grade.

“By that time, I forgot how to speak my native language, but I could still understand bits and pieces,” she said. “So I heard someone referring to the word ‘papers’ in my native tongue. And I was like, ‘Why are you talking about papers?’ And I put 2 and 2 together. And that’s when I found out about my status.

“I had no idea what it meant to be undocumented, so I went onto the internet and started researching.”

She was only 13. The moment changed her life.

“After I found out, I had a motivation to prove people wrong, because the narrative was that we’re not deserving,” she said. “And so once I entered high school, I challenged myself to take honors classes. I ended up enrolling in the IB diploma program, which stands for International Baccalaureate, and I entered college with 26 credits.”

She’s currently a senior at the University of Minnesota, majoring in sociology of law, criminology and deviance. She said the color of her skin is a kind of camouflage.

“Being black and undocumented, it’s a privilege, and also a curse,” she said. “A lot of people, when they think of undocumented people, they think about people from Mexico, Central America. They never think about someone who’s black, white, Asian. And so I’m able to hide a lot better, I guess, like I wouldn’t be necessarily profiled as someone who identifies as a Latino or Latina.”

Fér, 28, is Latina and Jewish. Minneapolis has been her home for 25 years.

“I am a Mexican Jew,” she said. “One of the things that really called me to Judaism was the community aspect. I have never been more embraced by people of another race than I have at my synagogue.”

She was born in the Mexican state of Morelos, more than two hours south of Mexico City. Her family crossed the U.S.-Mexico border when she was just a child.

“One of the things that will always stick in my mind was crossing the border and being separated from my mother, and being lost in the desert for a whole day, with nothing,” she said. “No water, no food.”

Luckily, Border Patrol agents found Fér, and gave her and her companions water and food before returning them to Mexico. She later reunited with her mother and father, and eventually traveled to Minnesota.

“One of the things that I want people to understand is that our parents shouldn’t be demonized for bringing us here,” she said. “Our parents wanted something better for us. And they wanted us to have the opportunities that they didn’t have. Unfortunately, with DACA being where it’s at right now, a lot of us feel that we have to go back into the shadows.”

Xiong, 32, was born in France, but his parents are from Laos. The family came to Minnesota in 1995, with visas, but those expired.

“They tried to deport us, and they couldn’t, so they gave us permission to stay,” he said.

Neither France nor Laos would take the family back because of political wrangling at the time. France had colonized Laos in years past, and there were also repercussions from the Vietnam War. Neither country would recognize his family as citizens. As in other regions still reeling from civil wars, many ethnic minority groups were left stateless.

For Xiong, who had been checking in with immigration officials since high school, DACA was a temporary relief.

“I always had to report in at the INS (Immigration and Naturalization Service) every week, every month … and then they finally told me every two or three months,” he said. “When there was DACA, I didn’t have to report in anymore, so it was kind of like freedom.”

“I’m hoping that one day, I’ll be able to travel without having to worry,” Xiong said. “It hurts when I hear people talk about other people, that they should go back to their country, when I can’t. I have no country.”

Xiong speaks French, Spanish and English fluently. He wants to finish college and become a psychologist. Fér speaks Spanish, Italian, French and English. She wants to go into international business. And Daisy is relearning Swahili, her native language, and wants to be either a teacher or an attorney.

Like other “Dreamers,” they say if Congress doesn’t pass legislation to protect them, those dreams will have to be deferred.