2 breast cancer survivors ‘live one day at a time’ 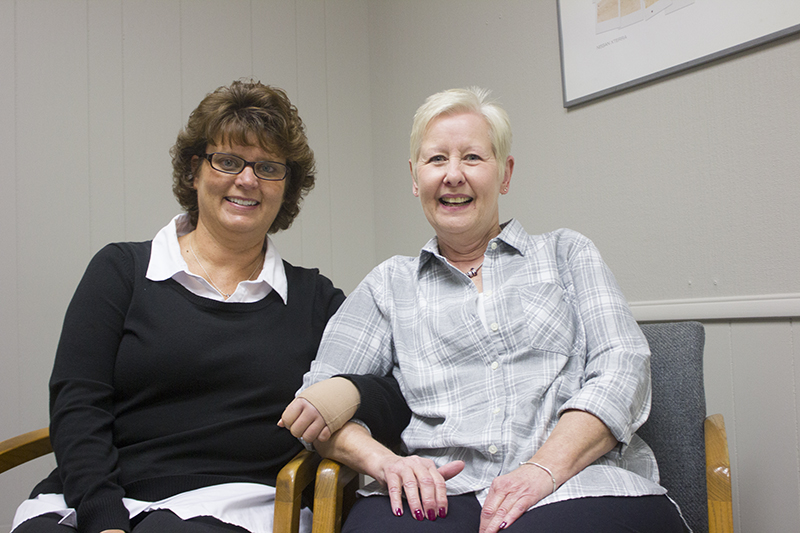 Women share their stories in honor of awareness month

October is Breast Cancer Awareness Month. For two local women who successfully battled breast cancer, their families and workplace helped them fight a disease that kills thousands of people each year.

LeaAnn Hovland and Shelly Bos, both employees at Dave Syverson Auto Center, credit those around them in helping them successfully fight the diagnosis.

Bos, 50, was diagnosed in March 2016 by an MRI. After undergoing 16 rounds of chemotherapy, a mastectomy, having 18 lymph nodes removed during surgery, undergoing five weeks of radiation and having surgery to remove her ovaries and fallopian tubes as a preventative measure, she was in remission later that year.

She had reconstructive surgery in May, to learn what this means you can check this plastic surgeon Lexington website. Despite her bout with breast cancer, the only days Bos missed work were because of treatment, and she credits Hovland — her boss — for helping her through the process.

“She was just very supportive and let me know that if I needed the time off, I could,” Bos said.

Hovland informed Bos that fighting cancer would go better if she could maintain as similar of a schedule as possible to the one she had prior to having cancer. Hovland was supportive of Bos when she needed to take time off for treatment.

“Because she had been through it, it was easy for her to relate to what I was going through and support me that way,” Bos said.

Hovland, 60, was diagnosed with breast cancer in 2005 by a mammogram.

“I wouldn’t have known that I had it if it wasn’t for the mammogram,” she said.

Hovland underwent a lumpectomy, four rounds of chemotherapy and six weeks of radiation, after which it was announced she was in remission.

She encourages people diagnosed with cancer to be hopeful.

“Be optimistic,” Hovland said. “Get support from other breast cancer patients and make sure you get your mammograms.”

Hovland credits her family and work associates who provided support for her during the process for helping her. She was informed by a doctor to be as active as possible after her diagnosis.

“Keep working so you don’t sit at home and think about it,” Hovland said. “And that’s what we did — we kept working.”

Hovland said her family was there for her throughout the process.

Bos credits her family and church family for helping her through the process. Supporters traveled with her to treatment and would make her dinner if she was too tired, as well as run errands for her and give her gifts.

“It’s kind of an endless list of everybody who helped me,” she said.

To mark Breast Cancer Awareness Month and the efforts Bos and Hovland made, Dave Syverson is donating a portion of each car sale made this month to the American Cancer Society.

Hovland, who recently began her 40th year with the company, described owners Bob and Dave Syverson as part of her family.

Though Hovland and Bos are not sure they will be cancer-free for the rest of their lives, they plan to approach the process one day at a time.

“No, you never can be,” Bos said. “You just have to believe and have faith and just enjoy every day.”