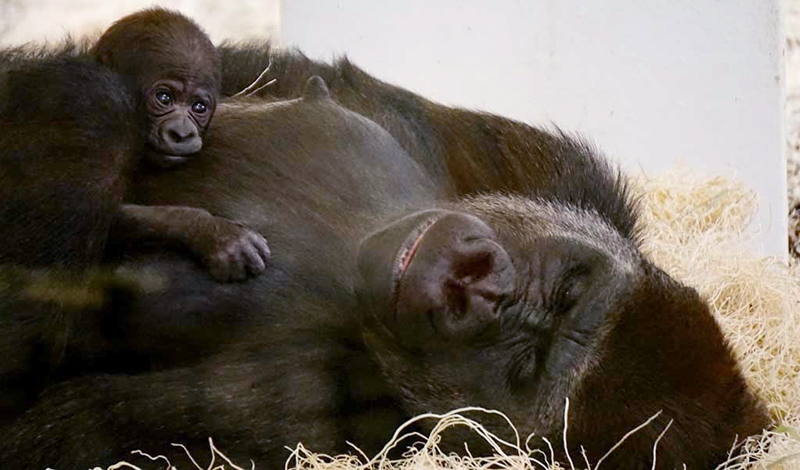 ST. PAUL — The Como Zoo’s band of gorillas has grown by one.

A newborn western lowland gorilla and her mom are both doing well after 15-year-old Alice gave birth to the infant last Wednesday.

This is only the third time a gorilla has been born at the St. Paul zoo. Como Park Zoo and Conservatory participates in a national plan to ensure that the genetic line of western lowland gorillas in captivity is as strong as possible.

The gorillas are critically endangered in the wild.

Senior zookeeper Allison Jungheim said staff will continue to watch both the baby and the mother to be sure they’re healthy.

“Giving birth can be a traumatic experience and we were making sure that she was comfortable and well fed and well taken care of,” Jungheim said.

Because the newborn gorilla is female, Jungheim said, she boosts the species in captivity and introduces a new genetic line.

The adult gorilla Alice previously bore an infant, but the male died a few days later. But so far, Alice and her new baby are doing better, Jungheim said.

That may be because Alice learned from another gorilla mother, Dara, who had a baby named Arlene.

“Two years ago, Alice was able to watch the whole process and able to see how mothering and nurturing that Dara was for Arlene,” Jungheim said. “It’s just a really good way for gorillas to learn from other gorillas.”

Arlene in turn was very curious about Alice, following her as she was in labor.

The baby and her family group are not being exhibited at this time.