Gretchen Annette Hansen passed away peacefully on Friday, Oct. 13, 2017, surrounded by loved ones at Thorne Crest Senior Living Community in Albert Lea. She was 90. Funeral services will be at 11 a.m. Friday at Bonnerup Funeral Service in Albert Lea. Visitation will be one hour prior to the service. Interment will be in Hollandale Cemetery. 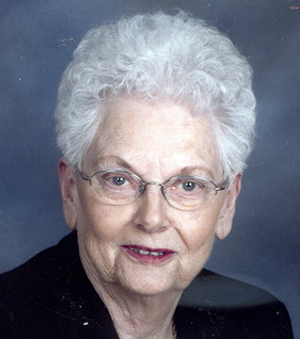 Gretchen was born on July 22, 1927, to parents Goodwin and Gladys (Hoverson) Schiager in Albert Lea. She was raised in Albert Lea and graduated from Albert Lea High School.

On Feb. 23, 1946, Gretchen was united in marriage to Wayne E. Hansen at Shepard Field Air\ Force Base in Wichita Falls, Texas. They made their home in Hollandale after Wayne’s military service was over in 1947. Together, they owned and operated the Hollandale Locker until the early 70s.

Gretchen resided in Hollandale for the last 70 years of her life. In her free time, she could be found cooking, crocheting afghans or enjoying cookies and a cup of coffee with friends. Once a month, she attended the Cousins Club, where they laughed, played cards and ate good food. Spending time with family was the most important thing to Gretchen.