A funeral service for Herbert Ulrich will be at 10 a.m. today at First Presbyterian Church in Albert Lea. The Rev. Dwight Netzer will officiate. Visitation took place from 4 to 7 p.m. Monday at Bonnerup Funeral Service in Albert Lea, and one hour prior to the service today at the church.

Herbert Ulrich was born Oct. 4, 1928, to Emil and Lena (Dobberstein) Ulrich in Lewiston. He grew up in various southern Minnesota communities. After his schooling, he began working on the family farm, and picked up jobs helping other farmers in the area. 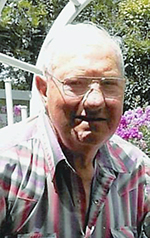 Herbert was drafted in the United States Army and served his country honorably from 1951 to 1953. On June 20, 1954, Herbert was united in marriage to Marjorie (Duschek) in Claremont.  The couple raised their family in Albert Lea, and lived in the community ever since. Herbert was a member of First Presbyterian Church in Albert Lea. He was also a member of the American Legion and the Eagles Club. Herb worked at Queen Stoves for over 35 years and was always a farmer at heart.

Herbert had a passion for horses. He rode horses when he was younger, and later would drive many different teams of horses and go on many wagon trains with his horse and buggy. Camp Courage Wagon train was a family favorite, which they participated in for over 20 years. Herbert also liked playing cards, drinking coffee and making homemade wine from their own grapes.

Herb loved to go camping in his RV and spend the winters in Arizona. Old-time music was his favorite and he enjoyed dancing the waltz and the fox trot. Herb never left home without a toothpick in his pocket.

Herbert is survived by his wife, Marjorie Ulrich; children Susan (Mike) Draayer, Julie and her son, Jarrod, of Arizona and David (Kathy) Ulrich and their children Matt, Jacob, Tyler, Joe and Cole; siblings Ella Hanson, Mary Lou Bettin, Anna Miller and Fred Ulrich; as well as many other loving relatives and friends.

He is preceded in death by his parents Emil and Lena; his youngest sister; and nine brothers.

He will be terribly missed; blessed be his memory. His loved ones said, “We love you.”