Funeral services will be at 2 p.m. Thursday at Cataldo Funeral Chapel, 160 E. Fourth St. in Garner. The Rev. Will Hunsaker will officiate. Military rites will be conducted by the Garner Veterans Ceremonial Unit. Cremation will follow the service and burial will be at a later date. Visitation will be from 5 to 7 p.m. today at Cataldo Funeral Chapel and will resume one hour prior to services at the church. 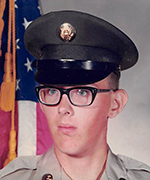 Jason Eckert, the son of Jason Sr. and M. Irene (Gustafson) Eckert, was born March 3, 1951, in Osage. He was baptized at First Baptist Church in Albert Lea and graduated from Albert Lea High School in 1970. He served his country in the U.S. Army for 22 years, being stationed at Fort Leonard Wood, Missouri; Fort Lewis, Washington; Fort Riley, Kansas; Schweinfurt and Badkissingen, Germany; Camp Castle in Korea; and Fort Campbell in Kentucky. Jason finished out his service in the U.S. Army Reserves.

On Aug. 16, 1975, he married Julie Jepson at First Baptist Church in Clarks Grove. To this union, two sons were born, Jeremie Laine and Joshua Alan. Throughout Jason’s military career, they lived in military housing in Germany and various posts in the United States. He enjoyed trips to Grand Rapids and the Marcel area, where his father took him fishing and hunting as a young boy. He carried on this family tradition with his sons, his father and brother, Ronnie. This occurred every year until his health no longer permitted it.

Jason’s family was his life. He looked forward to taking his grandchildren fishing. He wanted to go last year, but had open heart surgery. He was determined that he would be healthy enough to do it this year, and he did. On Sept. 30, he rented a pontoon boat in Clear Lake and created memories that will last a lifetime for those precious grandchildren, Naya Raquel, Gabriella Starr and Joshua Jr. “JJ.”