The funeral for Lawrence “Larry” Eugene Olson will be at 2 p.m. Friday at Salem Lutheran Church in Albert Lea. The Rev. Erica Cunningham will be the officiant. Following the service, the burial will be at Graceland Cemetery. The visitation will be from 5 to 7 p.m. Thursday at Bonnerup Funeral Home in Albert Lea, as well as one hour prior to the service. Bonnerup Funeral Home is in charge of arrangements. 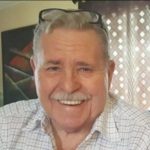 Lawrence (Larry) Eugene Olson of Albert Lea was born Dec. 26, 1930, in Albert Lea to Lawrence Peter Olson and Lillian Myrtle Rasmussen. He was 86 when he died peacefully Saturday, Oct. 14, 2017, at his home after fighting a courageous battle with cancer.

Larry lived his entire life in Albert Lea and attended grade school at Northside. He then went on and graduated from Albert Lea High School. While attending high school, he worked at National Tea, where he met his wife of 67 years, Charlotte Maurine Marpe, of Mansfield. The two were united in marriage June 3, 1950, at Mansfield Lutheran Church. The two were blessed with one son, Leslie, in 1955.

They loved to travel, ride motorcycles and snowmobiles. The couple especially enjoyed going dancing with friends. Larry was in the Minnesota Guard, worked at Boyd & Jacks, and  had his own gun shop at his home. He started in tool and dye at Scotsman’s, then was a tool engineer until retirement on March 31, 1989. Over the years he earned many awards and certificates for his work.

Larry learned to fly in 1950, and continued until this year. He and his wife, Charlotte, loved flying and would often go to flight breakfasts in different towns. He was one of 2,000 recipients in the United States to be honored with the Wright Brothers Master Pilot award in 2010. He was given the award for flying for 50 years without incident. Larry was the oldest pilot flying in Albert Lea.

Along with his love for his wife and flying, he was an avid hunter, trap shooter and woodworker. He loved to take pictures and did so often. He had a love for music and enjoyed playing the accordion and organ. Most of all, Larry loved spending time with his grandchildren and great-grandchildren.